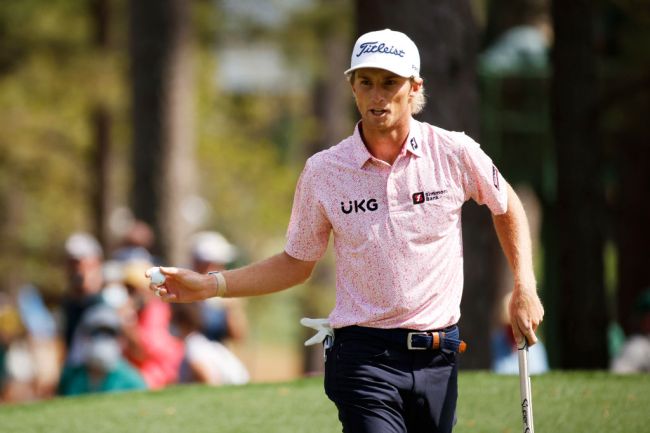 Will Zalatoris teed off for the final round of The Masters in a tie for second place with a chance to make a legitimate push for his first green jacket. The 24-year-old from San Francisco has generated a lot of buzz throughout the week for not only his impressive on-course performance, but for his resemblance to one of golf’s most famous caddies.

His 6-foot-2, 165-pound frame and bright blonde locks lead him to look a lot like Jared Van Snellenberg, the actor who played Adam Sandler’s caddy in Happy Gilmore.

How It Started How It’s Going pic.twitter.com/bEkRb2IkSK

You may remember him most from the scene where Happy is learning the game of golf and thinks that his caddy is stealing his clubs.

As someone who still qualifies for his parents’ insurance, Zalatoris presumably consumes social media more than the average professional golfer and has seen all of the memes throughout the first three rounds. While they’re being amplified on the biggest stage this week, the comparison has been made many times before and he’s embraced it. Prior to a WGC event in February, Zalatoris shared what was in his bag on his sponsor’s instagram. His lob wedge is stamped with the famous line from caddy scene in Happy Gilmore, “Mr. Gilmore, I’m your caddy.”

Of the many people who became fans of the former Wake Forest Demon Deacon, Happy Gilmore himself decided to hop on the bandwagon and wished him luck prior to Masters Sunday.

In addition to the Gilmore quote, Zalatoris has his dogs Luna and Kona’s names stamped on his other wedges. He also says that he marks his Pro V1 golf ball with a “99” as ode to his athletic prowess in a football throwing game at Dave & Buster’s. If you weren’t a fan before, you will be for life.