A Month After Being Drafted By The Lions, Aidan Hutchinson’s Sister Aria Won Miss Michigan 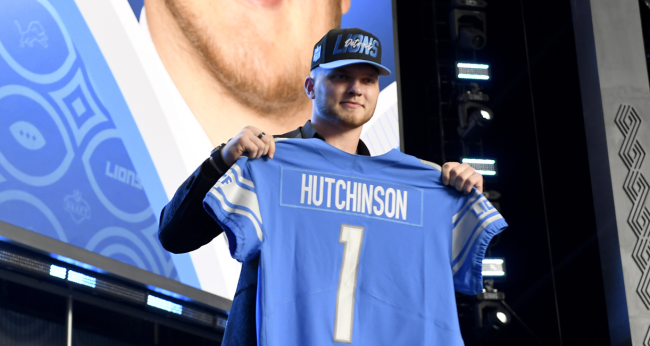 If the state of Michigan ever needs a family to officially represent it, the Hutchinson family should be at or near the top of the list.

Aidan Hutchinson, who starred at Divine Child High School in Dearborn, Michigan, went on to be named a Heisman Trophy runner-up while at the University of Michigan before being drafted second overall by the Detroit Lions.

His father, Chris Hutchinson, was also an All-American defensive lineman at Michigan.

And Aidan’s older sister, Aria Hutchinson, 23, just a month after her brother was selected by the Lions in the 2022 NFL Draft, was named Miss Michigan USA. She defeated 77 other candidates during the pageant at the McMorran Entertainment Center in Port Huron, Michigan on May 28 to take home the crown.

Which means at least one person in the family, Aria, will literally be representing the state of Michigan later this year at the Miss USA pageant on November 29th.

“A Plymouth native from a football family was crowned Miss Michigan on Saturday,” the Detroit News reported at the time. “Hutchinson graduated from the University of Michigan in 2021 with a degree in neuroscience, joining ScribeAmerica as a medical scribe in July.”

Aria Hutchinson, the sister of Lions draft pick Aidan, has also been having herself a year

After her Miss Michigan victory, many on social media couldn’t believe how blessed the Hutchinson family has been these past couple of months.

Decent genetics in this family.

This week, Aria Hutchinson was featured in a profile by the New York Post.

Hutchinson has been chronicling her visit to Cancun, Mexico, for her Miss USA orientation on Instagram.

Prior to her big Miss Michigan win, Aria also worked as a yoga instructor at White Buffalo Yoga in Plymouth and as a dining room hostess at Pepinos Restaurant in Orchard Lake, Michigan.

The Hutchison family has been taking major wins lately

Yes. Yes, they have.