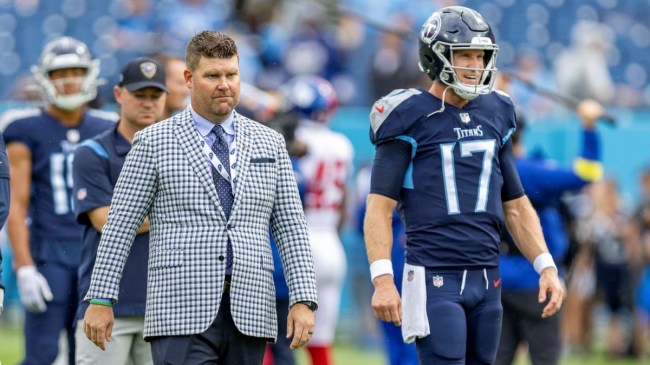 Since being named the Tennessee Titans’ general manager in 2016, Jon Robinson has had an immense amount of success. Robinson began his NFL career with the New England Patriots and used those ties to bring Mike Vrabel Nashville in 2018. He’s also responsible for drafting superstar running back Derrick Henry in the second round of the 2016 NFL Draft.

Robinson helped lead the Titans to the playoffs in 2017, their first such appearance since 2008. He’s led the team to six consecutive winning seasons for the first time in franchise history and two straight AFC South division championships.

Despite all of that, Robinson was shockingly shown the door on Tuesday.

The #Titans are firing GM Jon Robinson, per me and @TomPelissero. pic.twitter.com/21ozpvUscA

The Titans currently sit at 7-5 and in first place in the AFC South yet against despite a number of injury issues. But fans have a working theory as to why they Robinson go.

Robinson used the Titans’ second-round pick in the 2019 NFL Draft on Ole Miss wide receiver A.J. Brown. Brown quickly developed into one of the league’s most dangerous weapons, making the Pro Bowl in 2020.

But he was due for a payday following the 2022 season, and Robinson didn’t seem to believe he was worth that money. Instead, he make a shocking move to trade Brown to the Philadelphia Eagles for a first-round pick in the 2022 draft.

Brown has worked wonders for the Eagles. The fourth-year wideout 61 catches for 950 yards and nine touchdowns, helping Eagles QB Jalen Hurts develop into a superstar along the way. Meanwhile, the Titans pass game has sputtered.

The final nail in Robinson’s coffin may have come this past Sunday. Brown caught eight passes for 119 yards and two touchdowns as the Eagles blew out the Titans, 35-10.

Now fans are pointing to Brown as the reason for Robinson’s unemployment.

I’ve never actually seen a player who got traded literally get the guy who traded him fired https://t.co/ZaWhLX9djz

AJ Brown is out here getting people fired. https://t.co/AGhbFQnY28 pic.twitter.com/LSCFF0fcLq

They really saw AJ Brown go off on Sunday and said, yeahhh buddy turn in those keys https://t.co/nnl1ABsGh5

Damn AJ Brown got him fired after torching them. Bad trade huh https://t.co/EGdQzUrI2P

The moral of the story is this: maybe don’t get rid of superstar players that help you win football games.