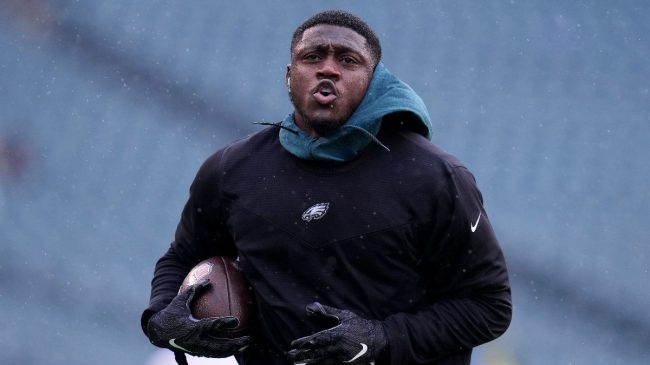 AJ Brown has been rather vocal about his time with the Tennessee Titans since joining the Philadelphia Eagles. The star receiver seems to hold a grudge even though all signs indicate he wanted out of Tennessee anyway. He recently spoke out about playing with Mike Vrabel and how it “wasn’t fun.” Now, Robert Woods explains his perspective and may have thrown some shade at Brown.

In late September, AJ Brown explained what it was like playing for Mike Vrabel and the Titans, per Josina Anderson. Apparently, Brown wasn’t having fun in Tennessee, which could have been the main reason he wanted to be traded in the first place. Here’s the clip of the former Titans receiver breaking it down.

Here is @1kalwaysopen_ on Mike Vrabel and his experience in Tennessee: https://t.co/MLSCa1SH6C

During the offseason, the Titans signed veteran wide receiver Robert Woods as a replacement for Julio Jones. After the trade, Woods has to take on a bigger role. On Tuesday, the veteran receiver was asked about Brown’s “no fun” comments. According to Turron Davenport, Woods may have thrown a little shade at AJ Brown.

Robert Woods was asked about A.J. Brown’s “no fun” comments. Woods said it’s a place where you have to know your job and be serious about winning. He said Sunday’s are their day to have fun. #Titans

The Titans have been a winning franchise since Mike Vrabel took over as head coach. His coaching prowess has been compared to Bill Belichick in the past, as his presence and demeanor are similar. Players have criticized the New England Patriots for the same thing. At the end of the day, Tennessee very well could have been a bad fit for AJ Brown. Robert Woods goes into further depth, per Jim Wyatt.

#Titans WR @robertwoods: Every coach and team has own style, philosophy. It is serious in Tennessee, you have to come in and work. … Once you do that, you can play fast and loose. It's exactly how I thought it would be – a lot of hard-working guys playing hard-nosed football

When it comes down to it, Brown sure seems to be having fun with the Eagles. He’s been a phenomenal asset for Philadelphia so far and has played a large role in maintaining an undefeated record. Meanwhile, Robert Woods and the Titans have bounced back to a 2-2 record as they fight their way back to the top of the AFC South rankings.

Look for Brown to continue flying high in Philly while Tennessee continues relying on Derrick Henry.