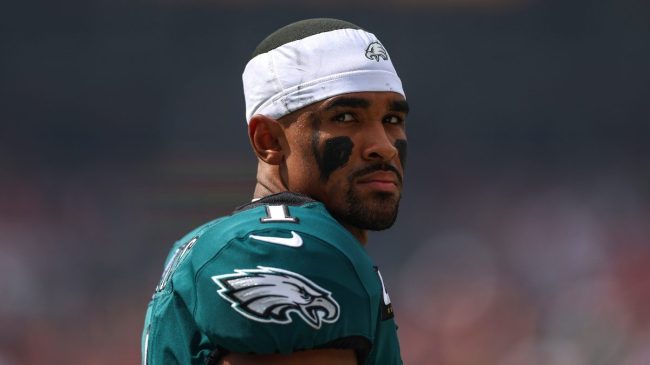 The Philadelphia Eagles are flying high right now as the offense has been lights out early this season. Jalen Hurts is playing on another level, so much so, that many are already putting him in MVP talks with Lamar Jackson. Now, we finally learn the one major trait that’s helping the young quarterback thrive, all thanks to offensive coordinator Shane Steichen.

According to James Palmer, Steichen is most impressed by how hard Jalen Hurts works. “On Friday we met after practice this past week. I’m walking through the weight room, 4 o’clock, kind of everyone is gone, he’s in there working.”

"On Friday we met after practice this past week. I'm walking through the weight room, 4 o’clock, kind of everyone is gone, he's in there working." (1/3)

The Eagles’ offensive coordinator just can’t get enough of the young quarterback. It’s obvious he’s put the time in to improve, as he’s looked phenomenal through three games this year.

This has to be music to Eagles fans’ ears. It’s been amazing watching Hurts sling the ball to AJ Brown and DeVonta Smith. Additionally, his elite athleticism makes him one of the most dangerous rushing quarterbacks in the league.

“He doesn’t leave the building. Like this guy is here all day every day. All he cares about is football. When all you care about is football, you’re going to be successful. That’s what he does. It’s all he thinks about. He never takes days off. I mean, he’s always working.” (3/3)

It’s safe to say, the Eagles may have just found their franchise quarterback for years to come.