Jalen Hurts MVP-Like Performance Vs. The Commanders Surprisingly Puts Him In The NFL History Books 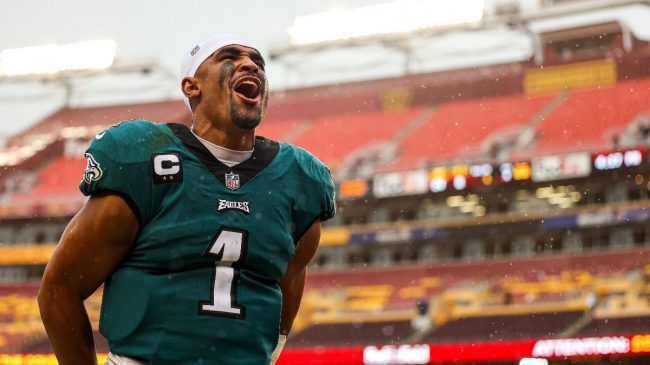 The Washington Commanders had no chance against the Philadelphia Eagles on Sunday. Jalen Hurts was a man on a mission, as he lit up Washington through the air and the ground. He’s looked phenomenal so far this season, as he’s looking like an early MVP candidate. Additionally, Hurts has put himself in elite company after just three games.

The Eagles’ offense has been unstoppable to begin the season. AJ Brown has been incredibly reliable, DeVonta Smith put the NFL world on notice on Sunday, and Jalen Hurts is proving the doubters wrong. Additionally, Philadelphia arguably has the best offensive line in the league and can run the ball effectively as well.

Look for Philadelphia to keep flying high on Jalen Hurts’ MVP-like season. It’s still early, but if he keeps putting up performances as he has, then the Eagles quarterback very well could be in the running to win the award. With how good this team is playing right now, Philly has to be considered an early Super Bowl favorite as well.