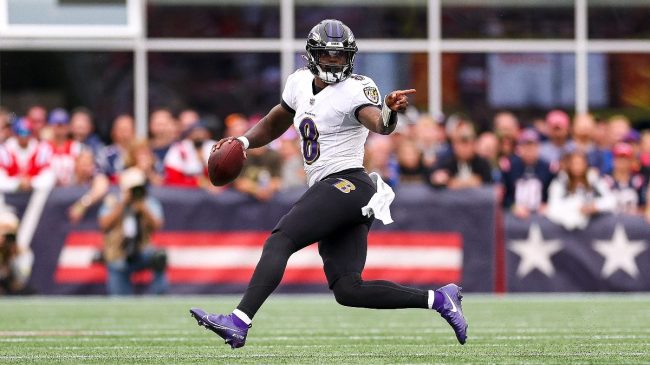 It’s safe to say that Lamar Jackson is going completely bonkers to begin the season. He’s been nothing but fantastic and looks like an early MVP favorite. He’s played so well for the Baltimore Ravens that his performance against the New England Patriots made NFL history.

According to NFL Research, “Jackson is the first player in the Super Bowl era with 3+ pass TD and 100+ rush yards in consecutive games.” The Ravens lit up the Patriots throughout most of the contest. It was close entering the second half, but Lamar Jackson took over and won the game for his squad.

Lamar Jackson is the first player in the Super Bowl era with 3+ pass TD and 100+ rush yds in consecutive games.#RavensFlock I @Ravens I @Lj_era8 https://t.co/pWvQZFH49j

The last time we saw Lamar Jackson playing this well he won the MVP award. As of right now, he has to be considered one of the favorites to win it. If that’s the case, Jackson would win the MVP for the second time in his young career.

It’s at the point now where anyone who downplays Lamar Jackson just straight-up doesn’t know what they’re talking about. He’s one of the most electric players in the league, as he is proving himself as an elite passer. Sprinkle some of his athleticism and natural ability and you have a true MVP candidate right there in Baltimore.

Look for the Ravens to continue leaning on their superstar quarterback throughout the season. Hopefully, JK Dobbins can get things rolling as he progresses from his knee injury. Baltimore is in great shape to potentially win the AFC North. As long as Lamar Jackson keeps putting up video game numbers, he could secure the MVP and lead his team to a playoff spot.