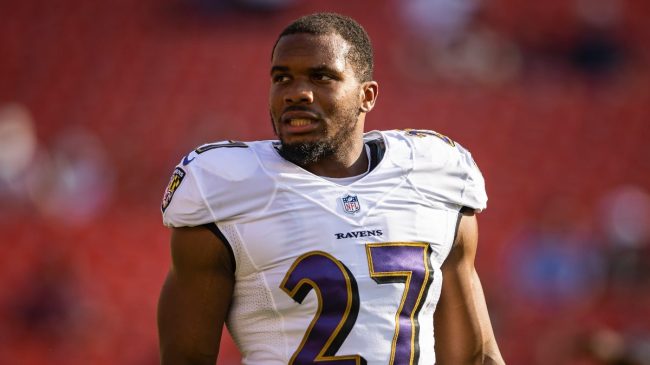 The Baltimore Ravens have struggled with injuries recently but they receive some big news on Sunday. After suffering a major knee injury last year, star running back JK Dobbins is set to return to the field. For that reason, the fanbase is going bonkers about the update.

JK Dobbins is Officially Back And Ravens Fans Are Loving It

Baltimore announced Dobbins’ return leading up to kickoff on Sunday. This is great news for the Ravens. Especially considering the run game has been surprisingly poor so far this season. Lamar Jackson has been the top rusher on the team in the first two games. So, hopefully, JK Dobbins can provide the boost the offense needs.

The Ravens are close to full health now as the secondary is still banged up. Even so, Baltimore has a real chance to win the AFC North, as the division is wide open for the time being. Regardless, the fans are loving the fact that JK Dobbins is back in the lineup.

Nick Meyers shared a little hype video about the news.

The dawg is indeed back.

We’ll see how Dobbins fairs in his first game back. He looked solid throughout his rookie year and has the potential to put the Ravens’ offense over the top. Especially considering how good Lamar Jackson has been throwing the ball lately.