A.J. Brown Tweets And Deletes Cryptic Message To Titans Fans About Being Traded To The Eagles 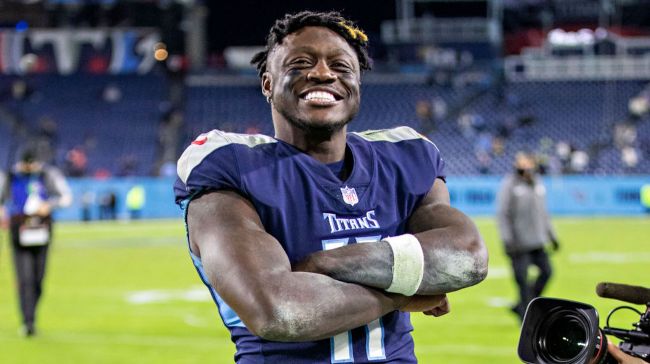 In one of the most shocking moves of the first round of the 2022 NFL Draft, the Tennessee Titans traded star wide receiver A.J. Brown to the Philadelphia Eagles in exchange for the 18th overall pick and the 101st pick in this year’s draft.

Brown, who the Titans selected out of Ole Miss with the 51st overall pick in the 2019 NFL Draft, caught 63 passes for 869 yards and five touchdowns in 13 games this year, bringing his three-year career total to 185 catches for 2,995 yards and 24 touchdowns.

With the 18th pick in the first round, the Titans — clearly not too keen on paying the 24-year-old Brown, who received a new four-year, $100 million deal from the Eagles — ultimately drafted the player they hope will be Brown’s replacement as they selected wide receiver Treylon Burks out of the University of Arkansas.

In response to the shocking trade, Brown took to Twitter to apparently address distressed Titans fans, saying in a since-deleted tweet that being shipped off to Philly “wasn’t his fault.”

“Tennessee I love you and you will forever be in my heart and I can say this now… THIS WAS NOT MY FAULT. But I wish you all the best,” Brown wrote in the deleted tweet, according to ProFootballTalk.

Brown will now take his talents and his fat new contract to the City of Brotherly Love where he will be teaming up with fellow promising wideout Devonta Smith and catching passes from Jalen Hurts, who will likely be given his final shot to prove he can be the Eagles franchise QB this season.

RELATED: The Internet Reacts To Kenny Pickett’s Fiancée Looking Sad As Pickett Continued To Slide In The First Round Of The NFL Draft