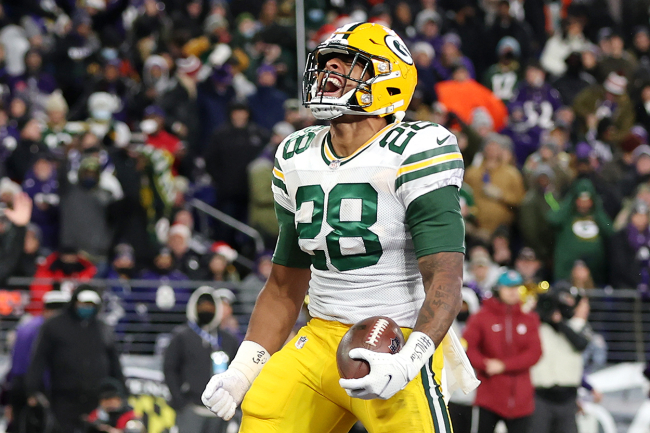 A.J. Dillon has the biggest legs amongst skill players the NFL and it’s not particularly close. Where Giants running back Saquon Barkley may have previously held that title, the Packers back has overtaken his NFC counterpart. His legs are huge.

Dillon, who was drafted in the second round of the 2020 NFL Draft, is coming off of his best season in the NFL. After getting acclimated behind Aaron Jones in 2020, the former Boston College standout took over a prominent secondary role and ran for 803 yards and seven touchdowns on 187 carries in 2021.

As he looks ahead to 2022, Dillon has been in the weight room. His quads have always been legendary and he earned the nickname “Quadzilla” because they are simply so large.

Packers RB A.J. Dillon’s quads are literally as big as his head in a helmet 😳 pic.twitter.com/tcjE5b2zcB

However, as he looks ahead to his third season in the NFL, Dillon’s upper legs might be bigger than ever before. If that is even possible.

Over the weekend, Dillon and a bunch of Packers both past and present played in a celebrity softball tournament for charity in the Green Bay area. After getting his bat on the ball, Dillon proceeded to hustle around the bases.

While doing so, his absolutely massive leg muscles were on full display.

They are so insanely large that two of Dillon’s heads could fit inside one of his legs.

And then, after making his way around the bases, he met former Packers wide receivers Donald Driver for a play at the plate. Once again, there is simply no way to keep your eyes from being drawn immediately to Dillon’s quads. They’s just so, so strong.

Who wins this matchup at home plate, me or @Donald_Driver80 in full football pads ? pic.twitter.com/Aie8CAttqq

To make things even crazier, Dillon is only 24 years old. He looks like a full-grown man but he still has time to get even bigger still. Bonkers.