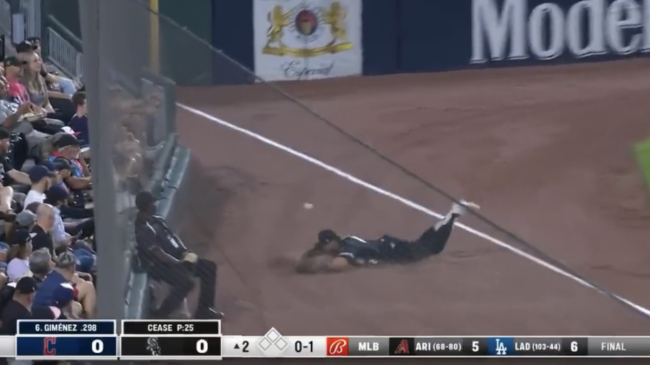 AJ Pollock likely won’t want to open up social media for the next day or two following an embarrassing faceplant in the White Sox Tuesday night matchup against the Guardians.

The left fielder attempted to run down a fly ball in the outfield but tripped and fell before he could wrangle the hit. It was like something you’d see in a Charlie Chaplin movie, the only thing missing was the circus music.

The result of the mishap was a triple for Cleveland batter Andres Gimenez, who would score later in the inning on a sacrifice fly. Through five frames, that’s been the only run scored in the ballgame.

Making things worse, the White Sox are chasing the Guardians in the AL Central race, currently trailing Cleveland by four games in the division. Those four games will likely be the difference between a playoff appearance for Chicago or sitting home in October.

Pollock’s lost footing won’t help those postseason chances, but it’s definitely given baseball fans something to talk about on social media.

AJ Pollock’s faceplant quickly took ahold of social media and is now going viral online. The clip has already been made into a GIF, which may all but sum up the White Sox’s 2022 season if they go on to miss the playoffs.

Twitter is going wild with reaction after seeing the comical trip and fall. Check out the immediate response below.

Here’s what happened to AJ Pollock in Left field on the Andres Gimenez Triple pic.twitter.com/qi6Ds694ql

AJ Pollock on that play pic.twitter.com/MYlOQFbhNI

Fans also posted hilarious replies to seeing the slip up. One person wrote, “Wait….did AJ Pollock just trip over the foul line?” while another commented, “Thank you AJ Pollock for that awesome faceplant.”

Definitely an embarrassing moment for the outfielder, but from baseball fans everywhere, we say, “Thank you.”