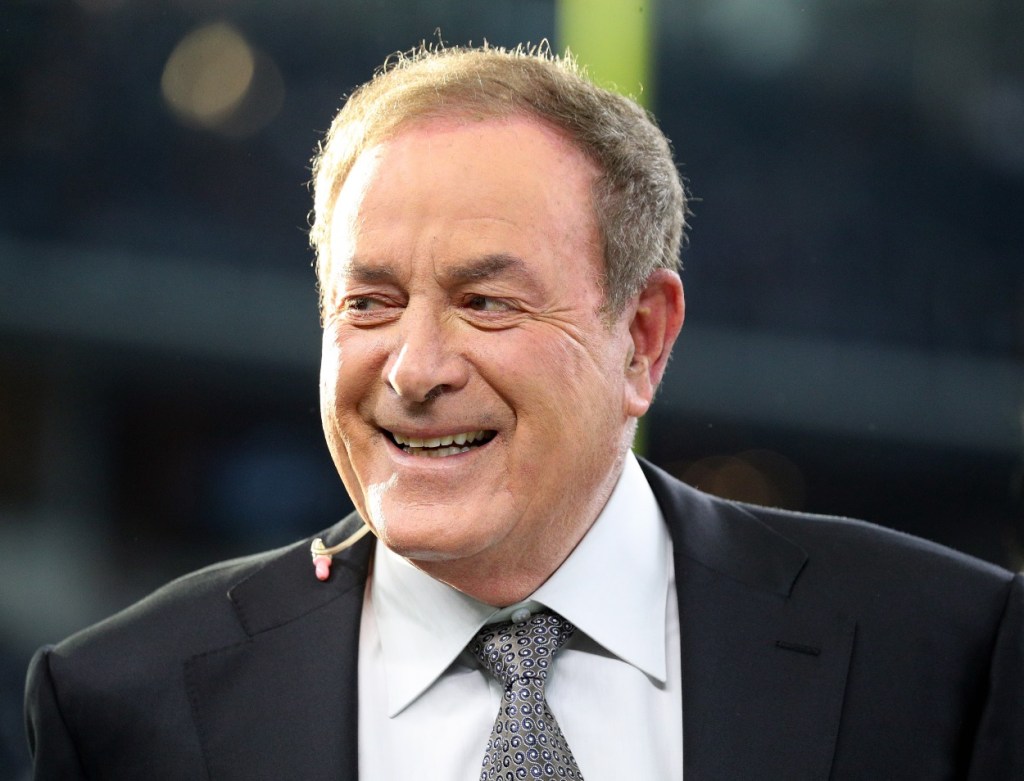 The man has called ELEVEN Super Bowls in his career is now reportedly headed to Amazon where he will be calling Thursday Night Football games. To many, that might seem like a big step back in a Hall of Fame broadcasting career but I personally see it as a way to inject life into otherwise forgettable Thursday Night Football matchups. Then there’s the whole ‘THIS MAN IS GONNA GET PAID’ aspect to it…

According to Andrew Marchand of the New York Post, the Al Michaels contract is at the ‘half yard line’ and he’s set to get paid more than the vast majority of NFL players. That is a strange concept to wrap the mind around, that someone in the booth is worth more to the TV product than most of the players on the field…

If Al Michaels' Amazon deal goes through, he will call all of the platforms' 16 Thursday Night Football games, according to sources.

Deal is at half yard line.

There was talk of Al Michaels' possibly just doing 11 of the 16 Amazon games, which is where the $30 million range contract talk came from. He is now doing all 16, if deal goes through with Amazon. So that total salary number maybe headed even further north. #DoYouBelieveInMoney

The Al Michaels/Amazon north of $30M number is over the length of the three year contract, not per season.

Still, an insane amount of money, but aggregators hold your fire.

Al Michaels will be making more than almost every player on the field — could approach $2 million a game. https://t.co/9244LtO7IN

$2 Million Per Game To Work In The Booth!

Al Michaels being paid a rumored $2 million per game is just so much money it’s hard to fathom. Consider this, Jonah Hill was only paid $60,000 to co-star in The Wolf of Wall Street. On average, TV directors get paid between $25,000 to $42,000 per episode.

Al Michaels would be making $2 million per episode of Thursday Night Football.

The late great Alex Trebek was making a reported $10 million/year to host Jeopardy! and the average quiz show host makes between $25K to $75K per week. And in late-night TV, Jay Leno was making $15 million/year after a pay cut and that’s to work a full season, not ELEVEN GAMES like Al Michaels.

Those stats are possibly a bit dated as they came from an older article in The Hollywood Reporter. But it’s really the only good source of information out there on show biz salaries so we’ll roll with that for now.

Will any NFL fans tune in just because of Al Michaels?

Zero people tune in for the announcers

Are there people that actually care who calls what games? Do people watch/not watch certain games depending on who covers the game?

With Al Michaels, Troy Aikman, and Joe Buck all receiving astronomical contracts recently to call NFL games it’s worth discussing if fans even care who is in the booth. Sure, a bad commentator can ruin a broadcast but does a good commentator in any way, shape, or form affect whether fans tune in?

I’ll admit that I watched more of the Manningcast than the regular feed last season but that’s because it was Peyton and Eli and they were bringing in special guests of distinction. I almost never know who is going to be calling an NFL game until I turn on the TV and see who is in the booth nor do I really care. But there has to be some compelling data somewhere suggesting these titans of the booth are worth upwards of $2 million per game….