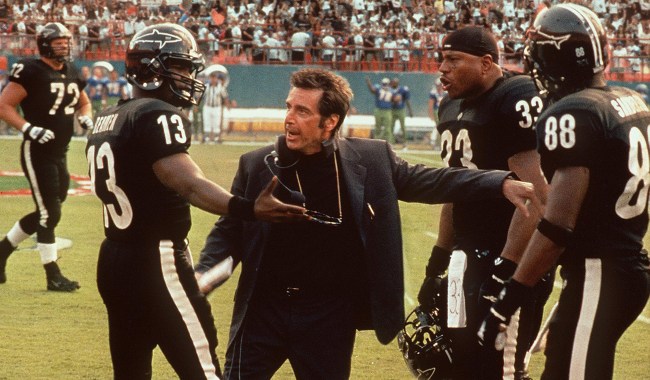 While discussing the 20th anniversary of the football movie Any Given Sunday in a recent interview with The Ringer, Academy Award-winning actor Al Pacino heaped some seriously high praise on Baltimore Ravens quarterback Lamar Jackson.

Pacino, who played Tony D’Amato, head coach of the Miami Sharks in Any Given Sunday in 1999 (as well as Joe Paterno in HBO Films’ Paterno in 2018), apparently has picked up a thing or two about what makes for a game-changing football player.

“Obviously Willie Beamen is ahead of the game. You see a lot of Willie Beamens on Sunday now,” said Williams about Jamie Foxx’s character in the movie. “I do think that the movie helped open the door for a different type of leader on the field. I think Lamar Jackson, I think Kaepernick, I think Russell Wilson.”

“I watch this guy Lamar Jackson. There are occasionally these players that are inspiring because you can see the game that they play is a game, and you can actually sense the joy they have in what they do,” replied Pacino. “That’s inspiring. Watching Lamar Jackson is an inspiration to actors. Finding that pocket, finding, where is that joy that gets under you and brings you out? The freedom to let go of the conscious, and get it to the unconscious and fly like he does?”

“With Willie Beamen, he was put in the background. Lamar was waiting behind Flacco, and I don’t see how he got overlooked. What Lamar’s doing was always there. You can clearly see it. Then you watch how he throws with such accuracy. He seems so comfortable throwing a football, like he’s been doing it all his life.”

Look at Michael Corleone, dropping some in-depth football knowledge. Maybe he should replace Stephen A. Smith at ESPN?

Also, can you imagine Al Pacino saying what you do is inspiring to him?! I’m going to have Cleveland over Baltimore this week now because Lamar Jackson’s head will still be spinning.

Read the entire incredible oral history of Any Given Sunday over at The Ringer.