OL Evan Neal Is Absolutely Shredded At 340 LBS And It Has People Saying He Should Be The No. 1 Pick 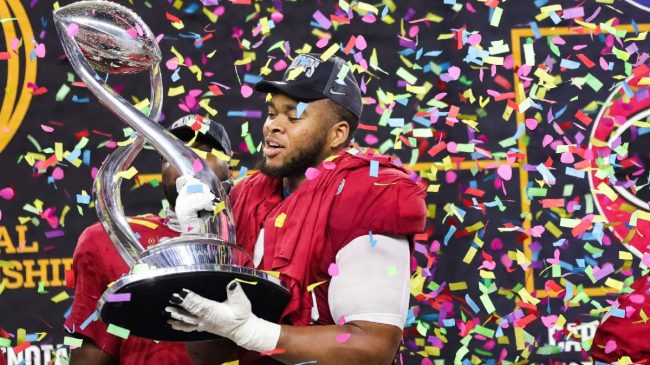 The NFL Combine is in full swing with scouts and GMs heading out to Indianapolis to get a look of the newest group of draftees. The top of the class consists of a pair of talented pass rushers, big bodied offensive linemen, and a few electric defensive backs.

And, as expected, we’ll see a number of quarterbacks taken over the course of the first round.

One player, in particular though, is improving his draft stock with just a picture.

The Crimson Tide star now has folks wondering whether he should be the top pick in the upcoming draft.

Neal came in with the credentials to be a top NFL pick. He helped bolster an Alabama offensive line that won the SEC and put up 40 points a game in the process. He was a consensus All-American and appears to have slimmed down a bit since his days in college.

The most recent update on the Alabama football website had Neal weighing in at 350 pounds.

Most mock drafts had the lineman being selected in the first 10 picks, but his stock might be rising now.

Bama’s Evan Neal. Carries 337 pounds like it’s 250. Lord. Pick him number one w no reservations at all. https://t.co/tz8aKqtw0o

You know what to do @Jaguars https://t.co/ZdHxkbt4oj

Evan Neal was a surprising athlete at 360+ pounds. Can only imagine what he’ll look like playing around 335. 👀 https://t.co/LVqJnGSqJ2

Looking more and more like the ‘can’t-miss’ prospect for the @Jaguars, there’s no way they can mess this up… right?? https://t.co/Mm9Ar0EXkS

Neal declined to take part in the on-field drills, but this photo may be enough to push him to the top of the draft boards.