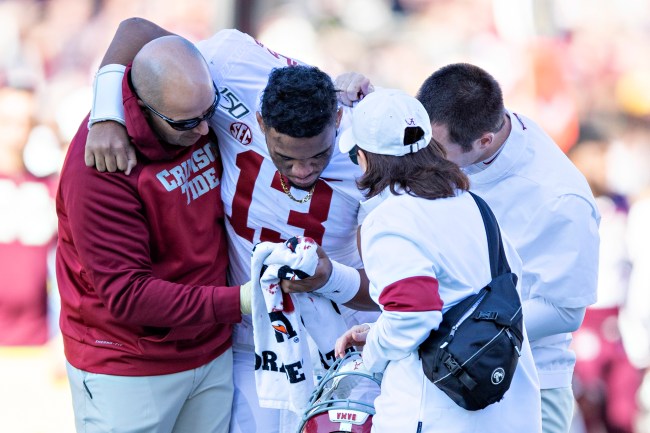 Early reports of Tua Tagovailoa’s injury he suffered during Bama’s game against Miss State are not good.

Before halftime of Saturday afternoon’s game, Tua had to be carted off the field after getting hit hard in the back field while scrambling.

Tua carted off after being unable to put any weight on his leg. Had to be carried into the cart. pic.twitter.com/d5NFkhX1mr

According to several reports Tua has a fractured hip and it’s “very serious’.

Tua Tagovailoa was airlifted to St. Vincent’s Medical Center in Birmingham. Nick Saban called it a hip injury that was possibly “serious” in on-field interview at halftime. Source says there was concern before end of game it was a “very serious” injury. MRI and scans next.

Video shows Tua Tagovailoa landing hard on right knee with defenders on his back. This forces ball out posterior socket. Leg then flexed & internally rotated. https://t.co/SX1q9M1gwg

Hopefully, Tua’s injury isn’t as serious as it’s being reported and he can play in the NFL next without any worries.

Update: Tua is confirmed out for the season with aa right hip dislocation but expected to make a full recovery.

Tua Tagovailoa’s season is over. This sucks. From Bama 👇🏽 pic.twitter.com/y1Xx3H8Vtq