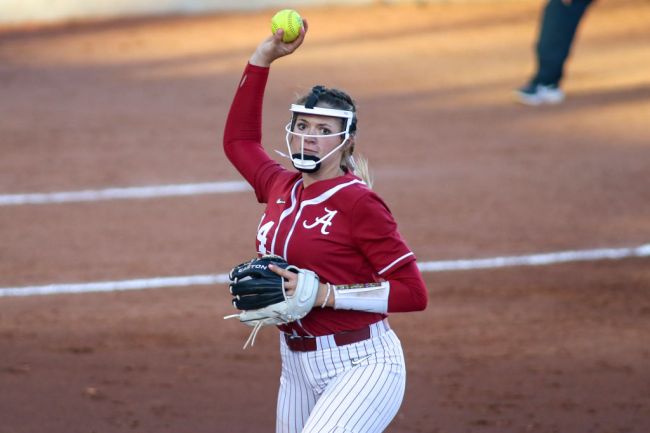 Not only does Alabama softball ace Montana Fouts have one of the coolest name in sports, but she can pitch. The junior from Grayson, Kentucky pitched only the sixth perfect game in Women’s College World Series history and it came on a very special day.

Fouts’ perfect game was the first in 21 years at the WCWS. She faced 21 batters and retired all 21. It was also her 21st birthday.

The Crimson Tide took down UCLA 6-0 and will advance to the semifinal. Fouts was in firm control of the Bruins lineup all night and a three-run home run from Kaylee Tow broke things open in the fifth. Had her remarkable night only been perfect, it would have been enough. In her effort, Fouts struck out 2/3 of the batters she faced.

14 strikeouts! 14!!!! This came just one day after she fanned 16 against Arizona. The pitching motion in softball isn’t as strenuous on the arm, so pitchers can pitch complete back-to-back games— with 30 strikeouts of 43 batters faced.

Montana Fouts was DEALING in @AlabamaSB's opening round win in the #WCWS pic.twitter.com/9A4TCKecNL

The perfect game also came one night after pitching in front of her idol.

Montana Fouts grew up idolizing ⁦@JennieFinch⁩
I don’t think she has any idea Jennie is in stands watching Arizona & also seeing HER pitch. It’s taken every OUNCE of self control I posses not to tell her. Childhood dream come true. ⁦@MontanaFouts⁩ ⁦@AlabamaSB⁩ pic.twitter.com/ssvE107kL8

After the 21 up, 21 down 21st performance, Fouts only had praise for her defense and teammates. Respect. Holly Rowe brought up the birthday element and Fouts admitted that she forgot that it was her birthday. Talk about dialed in!

"How can you not give everything you got?"@MontanaFouts discusses how having her team beside her has led to her success in the circle.#WCWS x @AlabamaSB pic.twitter.com/G85gyrhJq3

Of her 14 strikeouts, 13 were of the swinging variety. She has allowed only two hits in the tournament and one run, a solo shot. Fouts’ run has seen her strikeout 70% of the total opponents faced and it is truly remarkable. Roll Tide.