Fan Who Caught Albert Pujols’ 2,000th RBI Ball Left The Stadium With A Worthless Souvenir And Probably Didn’t Realize It 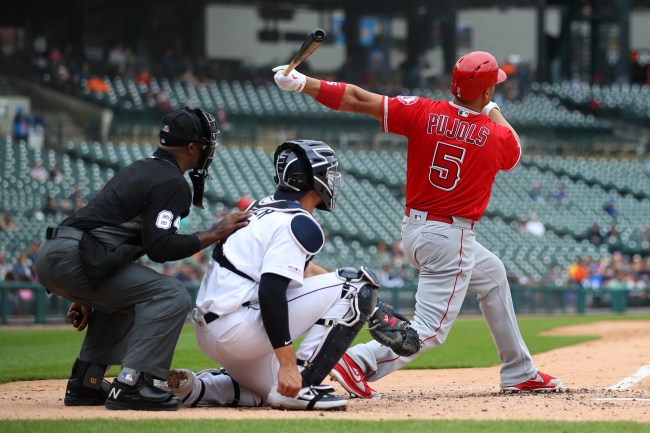 Albert Pujols hit a home run yesterday against the Detroit Tigers and in doing so he notched his 2,000th career RBI. Albert Pujols became only the 5th player in history to record 2,000 or more RBIs in a career, joining the likes of Cap Anson, Alex Rodriguez, Babe Ruth, and Hank Aaron.

This is where things got interesting. Typically, when a player hits a career milestone home run like that the team will offer the fan a bunch of gifts and perks to try and get them to turn over the ball because it belongs tot he fan who caught it. Free tickets to a few games, a meet and greet with some autographs, these are all normal offerings.

The Tigers and the Angels COMPLETELY butt fumbled this and the fan left the stadium with the ball because they initially offered him lowball gifts. They upped their offers a few times but still didn’t really do anything to persuade the fan to turn over the ball. The fan then left the stadium with Pujols’ 2000th career RBI ball *without it being authenticated* because the ball has to be authenticated there.

This means that historic baseball is worthless. It’s just another used game ball and is valueless on the baseball memorabilia market because the memorabilia market is weird. What’s crazy is the fan who caught the ball is saying he was threatened by the team saying they wouldn’t authenticate the ball unless he turned it over for gifts. Here’s how it all played out:

A piece of @MLB history! Eli Hydes caught the @PujolsFive home run for his 2,000th MLB RBI…and a chance to meet Albert after the game. pic.twitter.com/ZsojT2HKsM

Eli Hyde, the guy who caught the ball said the people who surrounded him looking to acquire the ball said they would not authenticate it if he left the ball park with it rendering it worthless. Hyde was not happy with how the negotiators went about the conversation.

Pujols on the fan who caught it "I think he was giving a little a hard time and I told the guys just leave it, just let him have it. He can have a great piece of history with him, when he look at the ball he can remember himself of this game, I don't fight about it."

Pujols "I don't play this game so I can pay fans so they can give me, you know… He can have that piece of history, its for the fans that we play for too. He has the right to keep it, the ball went in the stands so I would never fight anybody to give anything back"

Apparently the fan who caught Albert Pujols' 2,000th RBI ball declined to exchange it for anything, Pujols/Trout-signed gear. Many offers were made by #Tigers and #Angels officials. The guy left the stadium. The ball is not authenticated. It is worth nothing once fan left park.

‘Many offers’ were made. Here’s how it actually played out:

So they offer the fan an autographed ball when he 1000000000% realizes he has something more valuable in his hands. Then they tell him he can meet Pujols and get another autograph. Then they allegedly threaten him saying he won’t be able to get the ball in his hands authenticated by the stadium so it will be worthless. It’s unclear if he really understood that without authentication he wouldn’t be able to sell this ball to collectors. I certainly wouldn’t have grasped that in the moment.

If I’m that guy I do the exact same thing. If they actually threatened to not authenticate the ball, fuck that and screw them. I’d probably take it home, sit on it for a while, show it to friends, then mail it to Pujols after a few years so he could at least have it in his possession regardless of the authentication. Or I’d film a YouTube video of me setting the ball on fire just to spite the Tigers for their weak ass offers. What about you?

To be fair, someone somewhere will pay a lot of money for this ball even if it isn’t authenticated but the fact that it’s not authenticated means it has no value with collectors.