There Is Nothing More St. Louis Than Albert Pujols Bashing His 685th HR Then Celebrating With Nelly In The Front Row 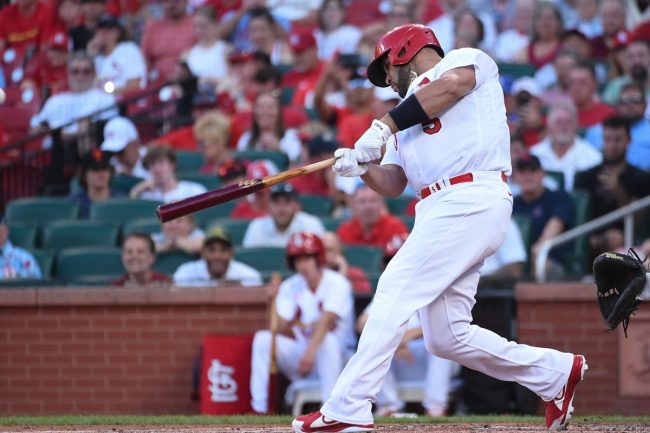 Both Albert Pujols and Nelly are St. Louis royalty.

Pujols, an MLB legend, played 11 years with the Cardinals, bashing 451 home runs. After a decade-long stint in Los Angeles, the slugger is back with the redbirds as his career comes to a close.

Nelly was one of the most prominent rap icons throughout the 1990s and early 2000s. He frequently repped The ‘Lou where he grew up.

The rapper was in attendance to watch Pujols achieve a milestone Tuesday night.

The veteran bashed his 685th career home run as he chases history. Pujols already ranks top five all-time in career homers, but with a few more this season, he can surpass Alex Rodriguez for the fourth-place spot. The righty likely won’t catch Babe Ruth’s 714, but with a strong second half of the year, he has an outside chance to reach the 700-HR mark.

He got one stop closer with that monster shot on Tuesday, and it led to an awesome celebration with Nelly, who was sitting in the front row.

Albert is heating up! pic.twitter.com/8F6jZjSP4b

After Pujols smacked his milestone homer and trotted around the bases, he saw Nelly standing in the front row. The two exchanged high fives before the slugger made his way back to the dugout.

The solo home run gave St. Louis an early lead in a game they’d win by a score of 7-6.

Awesome celebration for an awesome moment. It doesn’t get more St. Louis than that.