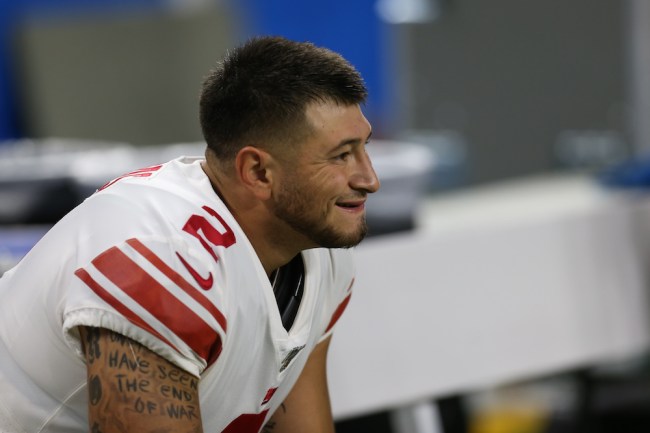 TMZ Sports is reporting that New York Giants kicker Aldrick Rosas was arrested Monday after allegedly T-boning a car and fleeing the scene. Police believe alcohol may have been involved in the crash.

Law enforcement officials say witnesses saw the 25-year-old going around 100 MPH and driving erratically at around 8:25 a.m. in Chico, California when he allegedly failed to stop at a red light.

Cops say he plowed straight into the side of a pickup at the intersection but kept on driving, despite disabling the vehicle he struck.

Law enforcement officials tell us when officers arrived on scene they launched an investigation — and say they eventually found Rosas walking near the crash site.

According to cops, Rosas’ hands, legs, and bare feet were covered in blood when they stopped him for questioning.

Police told TMZ that the former Pro Bowl kicker was booked on a hit-and-run charge and for driving with a suspended license.

The Giants released a statement on the incident, stating “We are aware of the situation and have been in contact with Aldrick. We have no further comment at this time.”

Rosas is coming off a down season, making just 12 of 17 field-goal attempts. He was re-signed as a restricted free agent for $3.3 million this offseason after the Giants used a second-round tender on the 25-year-old.

The Giants currently lead the NFL in players arrested.

Rosa is the second Giants player arrested this offseason. Cornerback DeAndre Baker currently faces eight counts of armed robbery and aggravated assault with a firearm from an incident in Florida in May along with Seahawks corner Quinton Dunbar.

On the same weekend that Baker and Dunbar were arrested, Redskins receiver Cody Latimer was booked after an incident that started with shots fired call to police shortly after midnight Saturday morning and Buffalo Bills defensive lineman Ed Oliver was arrested on charges of DWI and unlawful possession of a weapon.