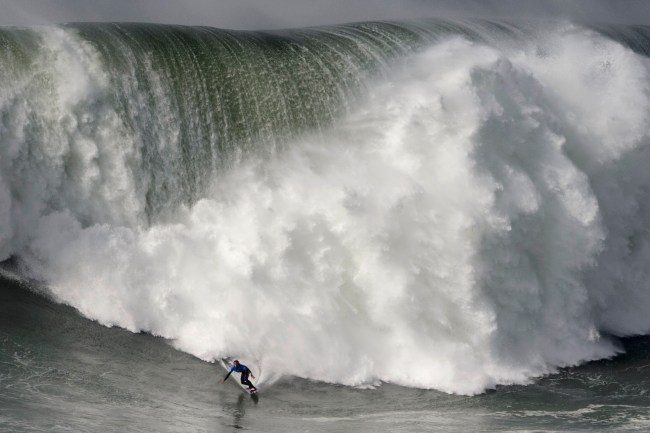 The invitation-only Nazare Tow Surfing Challenge took place early this morning in the tiny fishing village of Nazare, Portugal, a town located about halfway between Porto and Lisbon. Above, winner Kai Lenny is pictured catching one of the biggest waves of the day.

Nazare is home to the largest wave in the world. The world record for the largest wave ever surfed has been broken here multiple times. When the conditions are right, the wave gets damn near the size of a skyscraper and what’s wild is how closely it breaks to the shore. Spectators can literally stand on the hill overlooking the wave and watch all the action.

The World Surf League actually released a cool clip last weekend which shows why this turns into the biggest wave on the planet when the conditions are right:

There were some awesome moments throughout the morning with Kai Lenny absolutely charging waves but the entire world seemed to stop when Portuguese pro surfer Alex Botelho had to be rescued after what was classified as a ‘serious incident’. He was immediately rushed to the hospital with people uncertain if he was conscious or not but a recent report from WSL’s Instagram states that he is ‘stable and conscious’ but being kept at the hospital for further evaluation.

Here is the incredibly tense moment of his rescue. You can see the jetski carrying him as it connects with two converging waves and is launched into the air, ejecting the driver and Botelho.

Big Wave Surfer Alex Botelho was involved in a very serious incident during the Nazare Tow Surfing Challenge. He was rushed to the hospital and is currently stable and conscious. We are wishing Alex a full and speedy recovery. pic.twitter.com/md0iY7usdC

Alex Botelho finished the 2018 Big Wave Tour as the 8th ranked surfer so this isn’t exactly like a weekend warrior hopped in the water and bit off more than he could chew. This was one of the best big wave surfers on the planet having to be rescued from a potentially lethal situation with the first responders putting their lives on the line as well.

Hawaii’s Kai Lenny was named winner of the 2020 Nazare Tow Surfing Challenge and after watching this wave it’s easy to see why. He charges giant waves harder than any surfer I can ever remember. It’s truly astonishing how he maintains complete control in the gnarliest of conditions.

Congrats to Kai Lenny on winning it all and I’m relieved to hear that Alex Botelho is recovering at the hospital after a terrifying moment in the water.