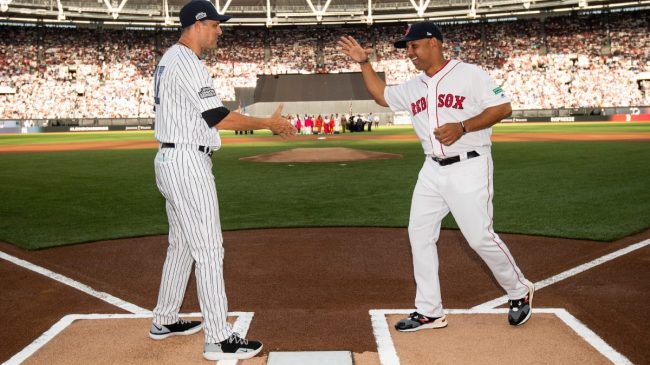 The Major League Baseball season is finally upon us!

Thursday’s Opening Day festivities get the 2022 campaign rolling as teams look to unseat the Atlanta Braves as World Series champions.

Two of those teams will square off on the opening weekend, with the Yankees and Red Sox renewing their long-standing rivalry for the upcoming year.

New York got some good news over the offseason, seeing manager Aaron Boone receive a contract extension to keep him in the Big Apple for three more years. Boone has won 60% of his games with the Yankees, notching three 90-win seasons since 2018.

New York made the playoffs in 2021, only to fall to Alex Cora and the Red Sox in the Wild Card play-in game.

Now, the Yankees will try to get revenge on the Sox for ending their postseason hopes last year.

With Opening Day approaching, Boston manager Alex Cora was asked about the Yankees signing Boone to a three-year extension.

His reply seemed harmless, but some believe that Cora is trolling his rival fanbase. Check it out below.

Red Sox manager Alex Cora said that Aaron Boone is “a great manager” and he is glad the #Yankees gave him a three-year extension.

Cora says that Boone is a “great manager” and that he’s deserving of the deal. Fans from both sides are wondering if there is a deeper meaning to the comment.

Cora doesn’t appear to have a leg to stand on in the head-to-head series, with Boone holding a slight 33-29 advantage since 2018, when both managers took over.

But diving into the postseason may tell a different story.

Cora is 17-8 in the MLB Playoffs. He led Boston to a World Series crown in his first season, while the team lost out in the AL championship series last year.

Boone, meanwhile, is just 11-11 in the postseason with the Yankees. That includes having lost four of five matchups to the Red Sox.

Cora has ended Boone’s season twice in the last four years, and fans now see his comment as a slight to the Yankees manager.

Check out the reaction.

so he can continue to school him 😭

Compliment Or Backhanded Jab? You Be The Judge

Cora and Boone seem to have a great relationship despite coaching for hated rivals. It likely goes back to their playing days. Boone actually said he was glad to see Cora back in the dugout after serving a brief suspension for his role in the Astros’ sign stealing scandal.

Their relationship off the field has been noted before, meaning this probably is a non-story.

Aaron Boone and Alex Cora messing with one another right before the first pitch pic.twitter.com/I8TUgne9q8

I’m sure Cora is just happy to see his friend and colleague continue to succeed professionally. But in this rivalry, you know the fans will twist words as they look to take a jab at the other side.