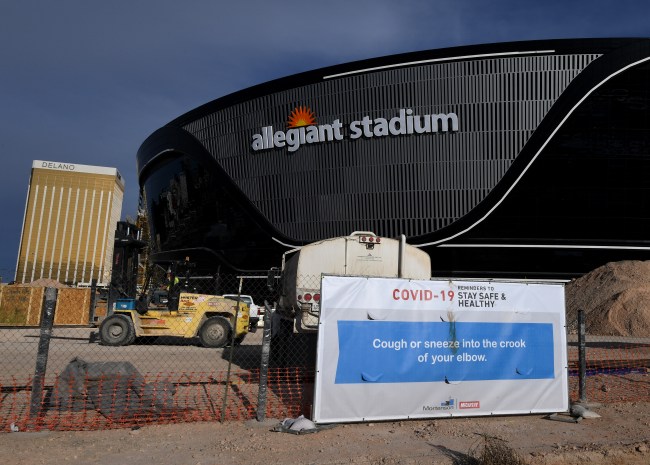 The Raiders new Las Vegas stadium is almost ready to open and it looks absolutely stunning.

The @FOX5Vegas is showing you some new branding on @AllegiantStadm. Working on that roof is not exactly the coolest place to be with a high around 100º. The Excessive Heat Warning continues through Thursday with highs in the upper-90s. @Raiders @unlvfootball pic.twitter.com/rj0Wd8I5nz

WE'RE READY FOR THE RAIDERS: The schedule is out and the stadium is getting closer to being finished! Check out this brand-new view of Allegiant Stadium from our 8 News Now Avi8tor drone.

Click here for a look at the Raiders upcoming schedule: https://t.co/xcjXiKec9J pic.twitter.com/0FOtZY8jdt

It seems like the Raiders are going to make their money back on the stadium once fans are allowed to attend games because tickets for next season are already sold out and are reselling for insane amounts of money on the secondary market.

Via Vic Tafur of The Athletic

In the first 12 hours the Raiders have been the most in demand team in the NFL, both in terms of ticket buying volume, and in terms of the average price of a ticket. Right now the average Raiders ticket is selling for $587. For reference the second highest team is the Seahawks, and they are down at $458. Looking at the most in demand games in terms of sales so far, the Raiders hosting the Saints on Sept. 21 is the second highest, only trailing the Cowboys at Rams game the week before. The Bills at Raiders game on October 4 is the fourth most in demand game of the NFL season, so two Raiders home games are in the Top 5, and the Bucs at Ra

FYI there are still some tickets available for the Raiders' first home game at Allegiant stadium. You're welcome. pic.twitter.com/baRQWhQpZA