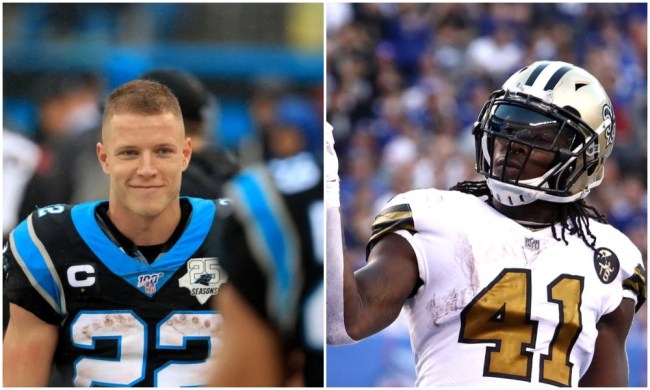 Outside of Christian McCaffrey himself, you may have a tough time finding another person as excited about McCaffrey’s new record-setting contract extension than Alvin Kamara.

Kamara was streaming ‘Call of Duty’ on Twitch when Adam Schefter’s initial report hit his phone so lucky for us we were able to see his real initial reaction to the news. Kamara was about to jump into a game but shouted pause before he shared a huge grin on the screen.

“Hey man, look, I don’t even,” Kamara jokingly said. “I just play football, I’m just a football guy. I don’t worry with all these contract and all these things, all this money.”

Alvin Kamara realizing he’s about to be a rich man after seeing CMC’s deal 😂 pic.twitter.com/IAhb07nUQk

Kamara was quick to give a genuine shoutout to McCaffrey for reportedly signing the new contract extension. The two have drawn some serious comparison over the years given their similar abilities both in the backfield and in the receiving game and there’s no denying that Kamara is excited to see a new record-high contract offered to a player he draws similarities to.

The former Tennessee running back is on the final year of his rookie deal and is in store for a massive payday. The Saints haven’t yet offered Kamara a new contract, but if they elect to do so ahead of the start of the season one would think Kamara will point to McCaffrey’s deal as a comparison.

McCaffrey is the only player in the history of the NFL to put up 2,500 rushing yards and 2,500 receiving yards in his first 3 seasons; that’s why he’s about to make $16 million per season over the next four years.