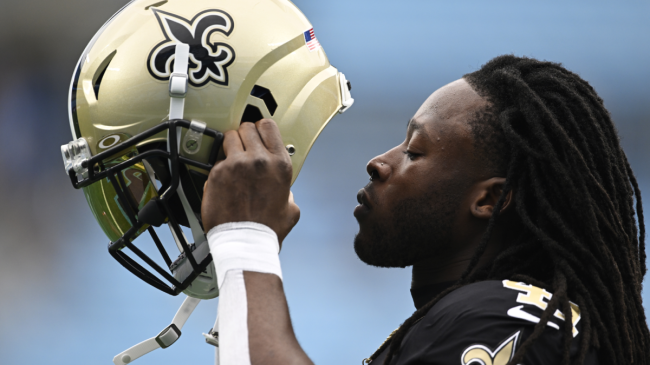 The NFL played one of its yearly games in the UK on Sunday with the Saints taking on the Vikings in London. The game was wildly entertaining, with Minnesota escaping with a 28-25 victory.

The ending was one of the crazier you’ll ever see. The fourth quarter went back and forth, with four ties or lead changes. The Vikings would eventually take a three-point lead on a late field goal, followed by New Orleans’ game-tying kick double-doinking off the upright and crossbar before bouncing out.

But while many football fans were happy to see an exciting finish to start the day, a number of fantasy footballers were pissed to see one game-time adjustment to the New Orleans roster.

According to CBS Sports podcaster Adam Aizer, 85% of CBS fantasy leagues saw Saints running back Alvin Kamara in the starting lineups. The rusher was a late scratch as he’s dealing with rib injury.

That injury was known, but it didn’t seem to be significant enough to hold him out of the game. Kamara was listed as questionable, though he was able to participate in a limited capacity throughout the week.

With Sunday’s kickoff taking place in London, folks in the eastern US saw a 9:30 AM start. It was even earlier for those on the West Coast.

So, while folks were still sleeping, they were unable to see the major lineup adjustment. And they were not happy.

Fantasy owners were not happy to wake up and find Kamara on the sidelines. Check out the immediate social media reaction below.

Fantasy footballer Andy Holloway wrote, “The Kamara late scratch on an early London game is one of the most difficult situations for fantasy players I’ve seen. No indication before this morning he was out. Fantasy managers sleeping. I’m all for manager-responsibility but this one is a near impossible one.”

The Kamara late scratch on an early London game is one of the most difficult situations for fantasy players I've seen. No indication before this morning he was out. Fantasy managers sleeping. I'm all for manager-responsibility but this one is a near impossible one 🫤

A number of other media accounts wrote similar posts, giving thoughts and prayers to those unable to make the switch in their starting lineups.

When you forgot there was a London game and Alvin Kamara was locked in to your fantasy lineup pic.twitter.com/OJhEJdtGK1

Alarm clocks on the west coast trying to warn fantasy owners sleeping in that Alvin Kamara is out today: pic.twitter.com/U3S29AFTEJ

Brutal start to your football Sunday.