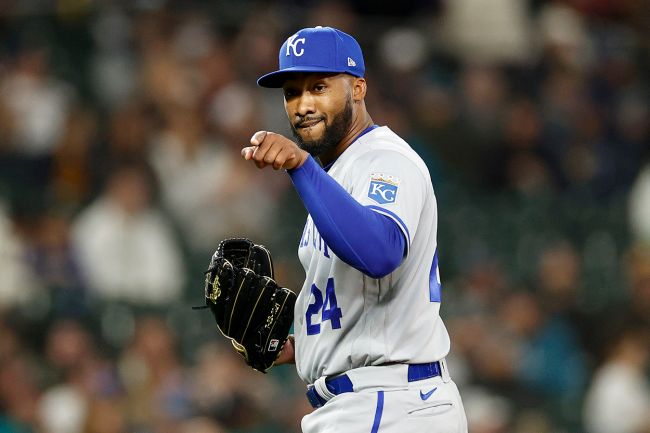 Amir Garrett is necessarily not known for his patience. The 30-year-old pitcher is often involved in altercation and Tuesday did not appear to be any exception.

Garrett, who was traded from Cincinnati to Kansas City in March, was involved in one of the craziest MLB brawls in recent history when he tried to fight the entire Pittsburgh Pirates team in 2019. He has not pitched well in 2022 and his patience appeared to run thin during his most recent altercation.

In a video from Tuesday night’s game between the Royals and White Sox in Chicago, Amir Garrett appeared to throw a drink at a fan.

Although there is very little context to the video, it appears as though a Chicago fan was a little bit overzealous. Again, it is unclear as to what led to the moment, but the video seems to paint a picture of what might have gone down.

A fan in the front row up against the away dugout, located down the first base line, is leaning on the dugout. With both arms up and half of his body on top of the dugout and out of the seats, he and Garrett look like they are going back and forth.

The fan — who is wearing cargo shorts, which says a lot — leans further over the dugout to say something at the Royals. It looks like he may have been directing the chirp right at Garrett.

Either way, no matter what he said, Garrett was fed up. Either his patience for the fan had run thin after a few innings, the fan said something that really upset him, or he lost his cool over something minimal. We don’t have enough context to know what really happened.

However, based on Garrett’s reaction, it may have been more one-sided. He proceeded to throw a drink over the dugout into the fan’s face.

In response to the incident, Garrett blamed the reaction entirely on the fan.

He called out the White Sox fanbase and their disrespect.

Listen the disrespect is insane in these parks. I really wish I could go to someone’s work and run my mouth. These are grown men talking slick. How miserable do you have to be with your own life?

While we may never know the full story, by Garrett’s account, the fan was being disrespectful and needed a drink to the face.