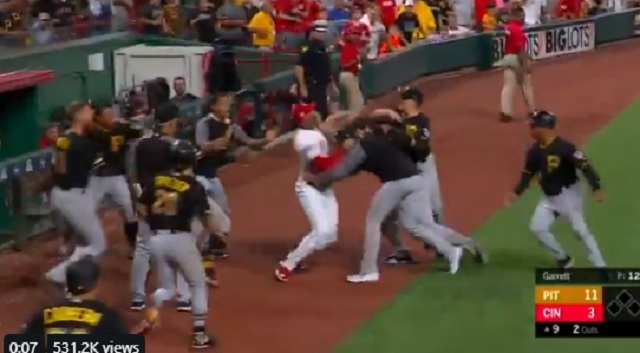 In the middle of today’s Pirates-Reds game, the Pirates bench apparently said something to Garrett that he didn’t like and the Reds pitcher immediately bumrushed the Pirates dugout to the throw punches.

Here’s an alternate angle of the brawl.

Amir Garrett, an absolute loser. Gives up a moonshot to Jose Osuna, chargers the dugout, gets put down by Kyle Crick. Enjoy the long suspension, pal. pic.twitter.com/B3x0vZp95N

Apparently, Yasiel Puig, who was traded by the Reds earlier tonight, was also involved in the brawl.

A pile of angry bodies form.

Yasiel Puig joins in despite having been traded. pic.twitter.com/UyzY7KllFD

I’ve never seen anything like what I just watched at GABP. Yasiel Puig traded. Amir Garrett charges the Pirates dugout. David Bell comes out of the clubhouse. And a real baseball brawl. Wow. #Reds

WHAT DO YOU THINK WAS SAID TO AMIR GARRETT TO MAKE HIM WANNA FIGHT AN ENTIRE DUGOUT pic.twitter.com/KCUsR6b3LK