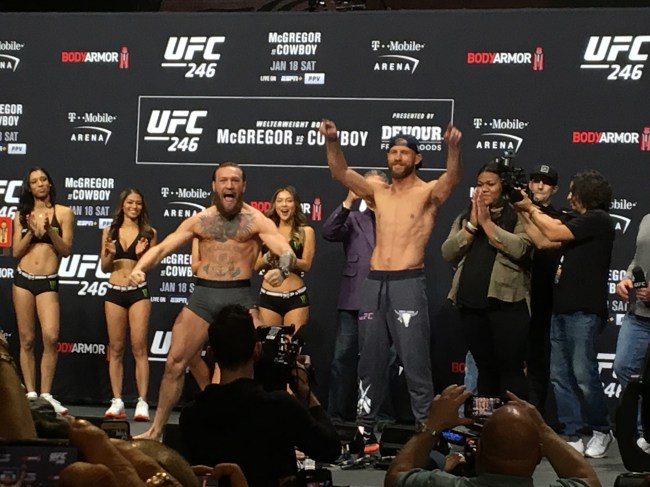 The good news: “The Notorious” Conor McGregor and Donald “Cowboy” Cerrone both made weight for their UFC 246 Pay Per View main event, hitting the scale at the welterweight 170 limit.

The bad news: Mexican strawweight Alexa Grasso missed weight by 5.5 pounds and was pulled from the UFC 246 PPV main card on ESPN+. Her bout against Claudia Gadelha has been cancelled as a result of 6 pound weight differential between the combatants.

With Grasso and Gadelha off the card, a bantamweight bout between Brian Kelleher and Ode Osbourne has been bumped up to the UFC 246 PPV card.

Otherwise, it was business as usual at the UFC 246 weigh ins.

Notably, Cowboy “Cerrone” was first up to the scale, while McGregor used the entire weight allowance after previously stating that he was underweight.

Looking at McGregor at both the early morning official weigh ins, and the afternoon televised ceremonial weigh ins, he is currently set to enter the Octagon at the highest weight of his career, and it will be interesting to see how the power in his mythical left fist translates with the increased body mass, and resulting torque.

It’s quite possible that we’re about to see an entirely different Conor McGregor than ever before. A more muscular and physical McGregor. And then again, looking back at UFC 196, a fight McGregor lost to Nate Diaz, it’s important to look at how Conor manages his energy early in the fight, in case it ends up going long.

For Cerrone, this is just another day at welterweight, a division where he has already competed 10 times, going 6-4. It’s already proven that “Cowboy” has the power to knock out large welterweights. Then again, “Cowboy” has mastered the head kick, and shins to the dome hurt at any weight class.

Further down the card, former welterweight Anthony Pettis was successful at the scale for his return to the lightweight division. Set to compete at 155 pounds for the first time in 15 months, Pettis gave his body a year to recover from weight cuts. It will be interesting to see how Pettis looks at lightweight, after an interesting 2019 welterweight campaign.

Also of note, lightweight Nasrat Haqparast needed to drop trow to make the 156 weight limit (there’s a one pound allowance in non-title fights). Disrobing in the infamous black hoop of shame, Haqparast hit the mark in the buff. Also, flyweight Sabina Mazo needed a second go on the scale after missing weight by a quarter of a pound on her first attempt.

“I'm coming for all of them in this division. It begins with Donald.”