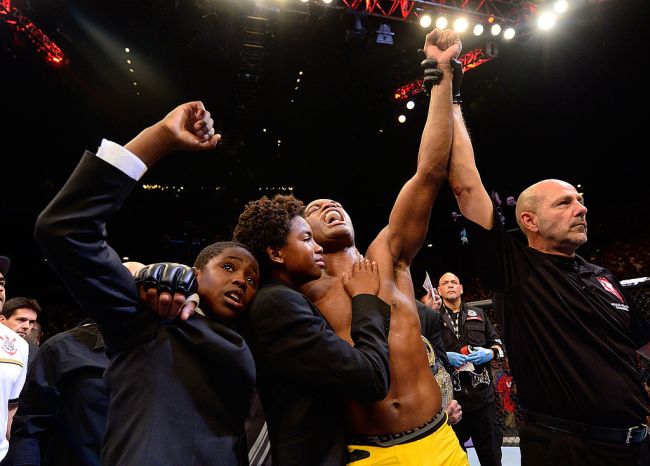 Kalyl Silva, the son of UFC legend Anderson Silva, made his kickboxing debut over the weekend and announced his arrival in style. The 22-year-old needed only 11 seconds to go 1-0.

Silva, who has also played pro soccer, stepped into the ring against Anthony Reynaga in a 159-pound match and made the most of his first kick.

Five seconds into the amateur kickboxing bout, Silva dodged a leg kick and regained his balance before moving forward with a perfectly placed switch kick. The kick landed hard on Reynaga and sent him to the mat.

Six seconds later, the referee decided he had seen enough. It was over. Silva won.

Silva’s walkout was reminiscent of his father’s, wearing a hoodie with Anderson Silva’s trademark logo. He bounced up and down just like his dad, loosening up his hands and getting locked in.

Not long thereafter, Silva channeled his inner ‘Spider’ by showing off his lightning-quick and surgically-precise striking. It didn’t take long for him to finish out the win.

Prior to pursuing a career in kickboxing, Silva was a professional soccer player in the United Premier Soccer League— one step down from the MLS. He has been training to become a fighter over the past few years.

Kalyl’s fight came on the same card as his older brother Gabriel Silva, who is the IKF Southern California champion. He defended his middleweight title against Kris Johann Acevado.

It’s safe to say that the Spider genes run deep. Look out for Kalyl.