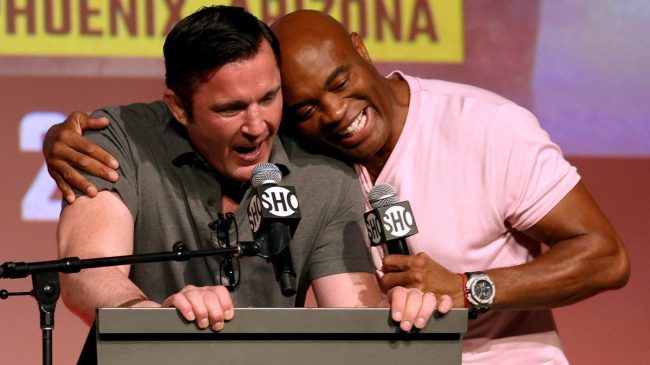 Anderson Silva is one of, if not the greatest fighter in UFC history. The Brazilian was the face of the company from 2006-2012 and if the undisputed king of the middleweight division.

Silva went 16-0 with 14 finishes in that time span. Two of those finishes, including perhaps the most famous, came against one of his biggest rivals, Chael Sonnen.

Sonnen entered their first fight as a massive underdog. But in the lead-up to the fight, it was his comments on the microphone that caught everyone’s attention. Sonnen ignited the fire between him and Silva by making both racist comments and derogatory comments toward Silva’s wife.

He then proceeded to go out and beat Silva for the first four rounds of their scheduled five-round title fight. But in the fifth and final round, Silva did this:

Following the fight, Sonnen tested positive for performance-enhancing drugs and Silva revealed he had been dealing with broken ribs.

After that fight, Silva’s wife Dayana had the last laugh, inviting Sonnen to a Silva family barbecue. But apparently Sonnen never showed.

Silva retired from UFC in 2020, but he’s apparently not done fighting. The man they call “The Spider” is set to take on YouTube superstar Jake Paul in a five-round boxing match on Oct. 29.

The two attended a press conference for the event on Monday with Sonnen serving as the host. Silva had one question for his former adversary.

Sonnen told Silva that he didn’t think the invite was genuine, and then asked if it was at Silva’s home in the US or back in Brazilian.

To which Silva hilariously answered “No, here. In Brazil a lot of people (will) try to kill you, trust me.”

Anderson Silva and Chael Sonnen hamming it up, who would’ve thought?