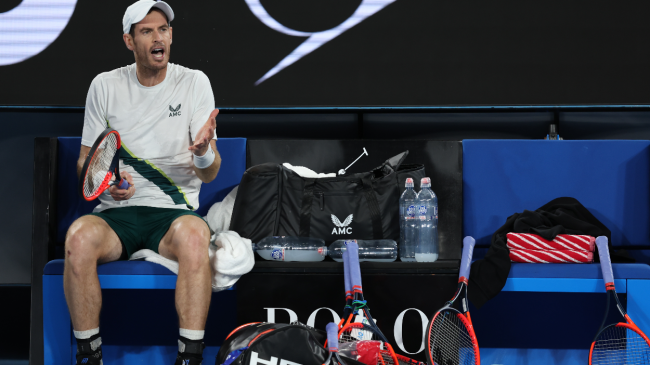 Andy Murray completed an exciting comeback to advance in the Australian Open on Thursday. He defied all odds while holding in the urge to use the restroom.

In a Finals matchup with Thanasi Kokkinakis, the Brit outlasted his competition in a match that lasted just under six hours and ended after 4:00 AM local time.

In the fifth set of that battle, Murray was seen arguing with an official while sitting on the sidelines. That disagreement had nothing to do with a call on the court, though.

Instead, it was due to the tennis star’s disgust over not being able to take a short bathroom break in between sessions. Check out the heated exchange below.

Now, the head official played everything by the rulebook, but that didn’t lessen Andy Murray’s frustrations. The ATP recently made adjustments to the bathroom rules after controversy erupted in a match involving Stefanos Tsitsipas.

Tsitsipas took a seven-minute break while competing against, guess who… Andy Murray.

Fact of the day. It takes Stefanos Tsitipas twice as long to go the bathroom as it takes Jeff Bazos to fly into space. Interesting. 🚽 🚀

After that seemingly never-ending pisser, guidelines were adjusted and boundaries were set. The new rule states that breaks can only be three minutes long and can occur just once per match. It must also come during a set break.

Despite having to hold it in, he was able to take down his latest competition in five sets to advance to the next round of the Australian Open. He’ll now face off against Roberto Bautista Agut on Friday.