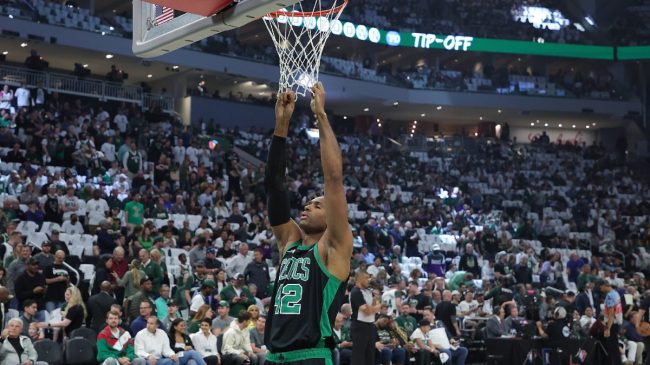 The Celtics left Milwaukee with an impressive 116-108 victory on Monday night. The win helped Boston even the series at two games apiece, giving them a huge leg up as the two teams return to the Garden.

Jayson Tatum was the star of the night, scoring 30 points and making some incredible shot in the process. He hit a number of clutch shots down the stretch to seal the fate of Milwaukee.

But he wasn’t the only reason for the come-from-behind victory.

Al Horford quietly put together a 30-point game of his own, connecting on 11 of 14 shots from the field. He made a team-leading five three-point attempts while also pulling down eight boards.

The night continued a hot streak for the big man over the last two contests as he also scored 22 points in the Game 3 loss. This after scoring just 11 and 12 points, respectively, in the first two appearances of the series.

Horford wasn’t holding back on Monday.

His emotion was in full force as he knocked down shot after shot in the Celtics’ comeback. But there was one play that stood out in his super performance.

Al Horford dunks over the top of Giannis Antetokounmo

Horford pumps, then blows by Giannis Antetokounmpo to get to the rim. The veteran skies for the jam with Antetokounmpo on his back.

The dunk was literally bone crushing as an inadvertent elbow sent the Bucks’ big man to the floor.

While the dunk (and elbow) landed Horford a technical, it also offered a bit of revenge for the Boston forward. Earlier in the game, it was Horford who was being dunked on by the Greek Freak. Oddly enough, a technical foul was handed out on that play, too.

While it was certainly sweet for Horford to get his payback, it sounds like his sister knew it was coming all along.

Anna Horford chimes in on her brother’s emphatic jam

This is where the Bucks f*cked up 😂 I know that look… He was pissed.
pic.twitter.com/rYFn45zb61

Anna goes back to that dunk by Antetokounmpo, noting Horford’s reaction to the play.

“This is where the Bucks f*cked up. I know that look… He was pissed.”

It didn’t take long for Horford to turn the tables. This clip shows the sequence of events perfectly.

You can see the exact moment when @Al_Horford plotted his revenge pic.twitter.com/7sv8oXLKZk

If the Celtics continue to get this kind of play from Horford, they’ll certainly have a chance of bringing home an NBA title.