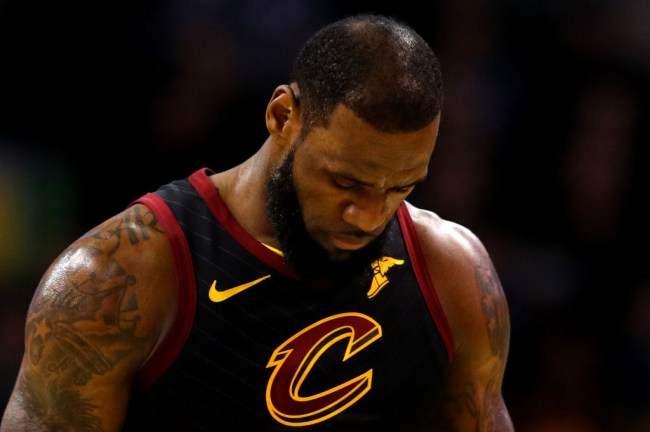 Things aren’t going good for the Cleveland Cavaliers right about now. The team has lost nine out of their last twelve games and players are starting to complain to the media. Last night after the Cavs latest loss to the Warriors, several Cavs players spoke to The Atlantic, ESPN, and Cleveland.com about how much worse the team is without Kyrie Irving.

via The Athletic’s Jason Lloyd:

Players on both teams Monday were quietly acknowledging that [Kyrie] Irving’s absence has changed the entire complexion of this rivalry.

Rotations are awful. IT (Isaiah Thomas) is so much worse than Kyrie (Irving) defensively it’s insane,” said a league source. “There is not a great feeling anywhere. They need to limp into the All-Star break and get away from each other.”

multiple players acknowledged growing discontent and a strong sense of concern that unlike past seasons, the team does not have the capability to fix its problems and get back on a championship track.
Several prominent players, speaking on condition of anonymity to ESPN,
expressed doubt that the problems — an aging roster, defensively challenged personnel and a glut of redundant role players — could simply be worked out through patience and a chance to coalesce when fully healthy.

It feels like every season the Cavs go through an existential crisis around this time of year but eventually figure things out in the second half of the season. I highly doubt that a team with LeBron James on the roster wouldn’t be able to at least the NBA Finals.