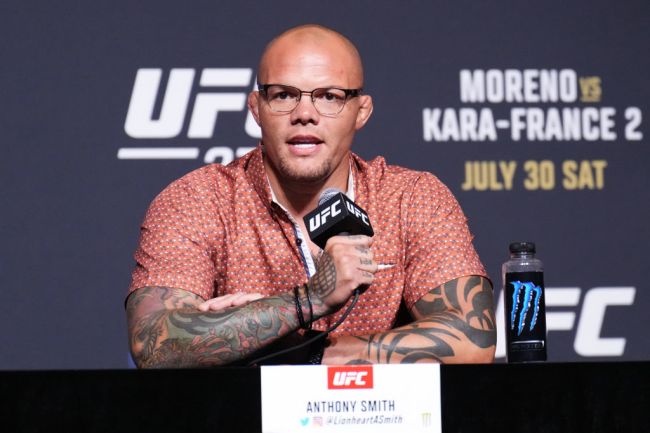 Anthony Smith is used to being counted out. He’s been counted out repeatedly during his UFC career. In fact, he has made a career out of making people regret counting him out.

Andrew Sanchez was expected to steamroll Smith. Smith finished Sanchez. Hector Lombard claimed he didn’t know who Smith was before their fight. Smith knocked Lombard out in the 3rd round. Volkan Oezdemir and Alexander Gustafsson were both heavy favorites against Smith. Smith submitted them both.

Now Smith is being counted out again. Smith is currently more than a 4-1 underdog heading into his fight against Magomed Ankalaev tomorrow night. Smith hasn’t been this big of an underdog since he fought Jon Jones for the Light Heavyweight belt.

Just like all of the other times Smith has been counted out, he’s guaranteeing that Ankalaev is going to be in a fight tomorrow and according to Smith, it’ll be the first time in his career that Ankalaev has ever been in a fight.

"I’m of the belief that Magomed Ankalaev has been in 18 mixed martial arts competitions and zero f*cking fights."

Anthony Smith will bring the fight at #UFC277.

Ankalaev certainly hasn’t faced much adversity in the UFC. He has knocked out 3 of his opponents and the 4 fights he has had go to decision have all been clear wins for him. The only adversity he has actually faced in his career came in his fight in the organization and saw him tap to a triangle choke in the final second of a fight he had dominated for more than 14 minutes.

There are reasons that Smith is such a sizable underdog heading into this fight, but if there’s anybody who can guarantee they’re going to bring the fight to Ankalaev, it’s Anthony Smith.