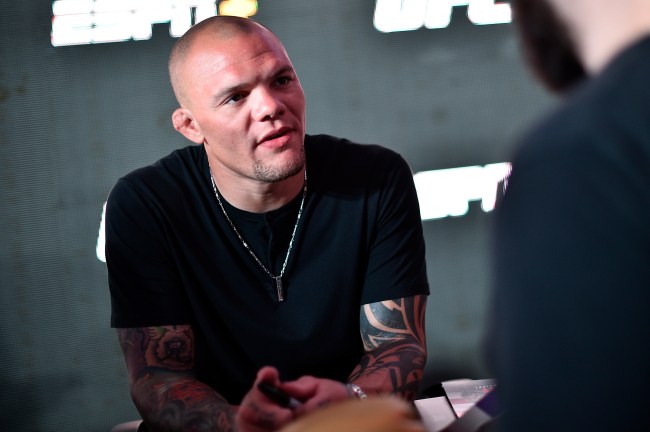 UFC fighter Anthony Smith is a certified badass, as evident by his 33-14 career record. But with all the bouts the 31-year-old has had during his days in the Octagon, it was one with a home intruder in the middle of the night inside of his house that he described as being one of the “toughest fights I’ve had in my whole life.”

According to ESPN, a man named Luke Haberman has been arrested for the attempted burglary, with police charging him with first-degree criminal trespass, which is classified as a misdemeanor. But the details from Anthony Smith about the fight that ensued between he and Haberman as the police were on their way is what makes the story terrifying AF.

In Smith’s words, Haberman wouldn’t back down, and continued to brawl with the UFC fighter even after Smith was handed a kitchen knife by his mother-in-law — with whom he shares a house with. Take a look at the scary details that Smith told to ESPN’s Ariel Helwani about the incident below.

Smith said his wife woke him and told him there was a man in the house. Smith said he could hear a “man’s voice screaming at the top of his lungs.” Smith left the bedroom, turned a corner and saw Haberman in a computer room.

“I didn’t know what he had,” Smith said. “Typically people don’t break into your house in the middle of the night for any good reasons. I’m expecting that I’m gonna hear a gunshot or he’s gonna stab me. Like he’s got something. I figure I’ve got about two minutes before whatever he’s got takes me out.”

“No normal human is able to fight like that,” Smith said. “I’m by no means the baddest dude on the planet. But he’s a regular Joe and I had a hard time dealing with him. And he took everything that I gave him — every punch, every knee, every elbow. He took every single one of them and kept fighting me.”

At one point, Smith said, his mother-in-law brought him a kitchen knife, which he held to Haberman, who continued to fight him, Smith said.

When the police arrived, officers were able to subdue Haberman, Smith said. He said there was blood all over the computer room and Haberman was cut and had swelling on his face.

“I’m not lying when I said it was one of the toughest fights I’ve had in my whole life,” Smith said. “I went into that fight ready to die. Nobody smart breaks into a house in the middle of the night unarmed. … When they break in at night, it’s to hurt people.”

“You always just think you’re such a badass,” Smith said. “I just don’t feel like one. I feel … insufficient a little bit. I didn’t know it was possible to be that terrified.”

Good lord that’s insane. Considering Anthony Smith stands 6’4″ and tips the scales at 205 pounds, it terrifying to hear him say he struggled with some regular guy. How big was Haberman, anyway? Anybody have the tale of the tape?

All joking aside, it’s a good thing Smith and his family are all OK after the scary encounter, and, luckily, he was home to fend off the potential burglar.