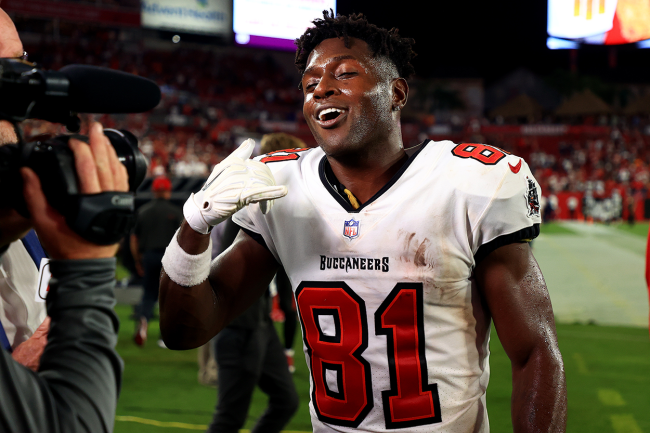 Antonio Brown has been suspended by the NFL for ‘misrepresenting vaccination status.’ Apparently, it is not the only rule that he is unable to follow.

Brown, who has been dealing with an ankle and heel ailment over the past few weeks, posted a bizarre video on Friday morning. In the video, the 33-year-old wide receiver can be seen jumping furiously on an exercise trampoline.

It’s unlike anything you’ve ever seen before.

Brown is holding onto a multi-use weight rack and has a trampoline set up on an angle. Using the bars to propel himself, he goes flying off of the trampoline. He even throws in a few scissor kicks and aerial stunts, just for fun. Brown looks like a little kid in one of those trampoline gyms.

For those wanting an update on Antonio Brown’s ankle… pic.twitter.com/vyCu1bRWWS

While the “workout” looks like an absolute blast, he is breaking the very clearly-stated rules. On the ‘Hoist’ trampoline, a label reads “no jumping on rebounder.”

A rebounder, if you are unfamiliar, is the type of trampoline. It is not intended for jumping, but for an additional element to a cardio workout— like high knees, for example.

Brown, who is jumping like crazy on the trampoline, is completely disregarding the disclaimer. Just like he did with his vaccine card, he cannot follow the rules.

To make things even more strange, it is hard to imagine that this was trainer-certified rehabilitation. Brown, although unable to play due to suspension, was expected to miss the next two games anyway with his ankle.

And yet, here he is going crazy on a loosely-arranged trampoline. What an interesting case study that Brown is.