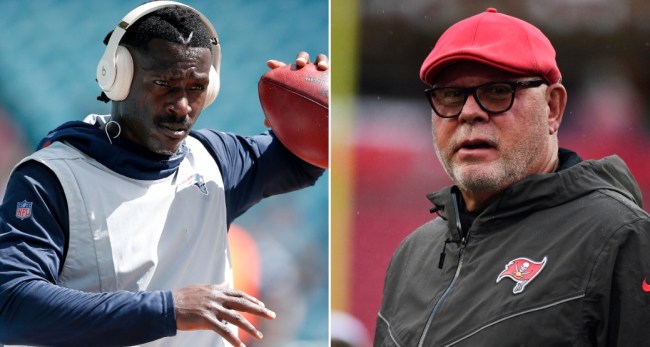 Antonio Brown and Bucs head coach Bruce Arians have a bit of a tumultuous history which could make things a bit awkward in Tampa Bay. Arians, who had coached Brown back when they were both with the Steelers, didn’t seem interested in signing the wide receiver this offseason because he thought Brown was a “diva”.

On Friday night, ESPN’s Adam Schefter revealed that the Bucs decided to sign Brown to a 1-year deal despite Arians’ comments after Tom Brady pushed for the team to pick AB up.

Update: Antonio Brown and the Buccaneers have reached agreement on a one-year deal, per sources.

Language still has to be finalized, COVID protocols passed, but Brown is likely to make his Bucs’ debut in Week 9 against the Saints.

Immediately after the signing fans dug up an old tweet from 2019 of Brown bashing Arians, who had been critical of him at the time.

He didn’t draft me he drafted @ESanders_10 same guy who missed rehab to go on networks to talk about me on situation he have zero clue! Arians now wears kangoo hats n glasses 😂 but ima diva! Done seen it all then they say we friends stop lien https://t.co/jALXyhQMAw

Fans thought it was funny Brown was going to play for Arians after publicly bashing him on Twitter just last year.

@BruceArians should cut you before you even show up at team headquarters https://t.co/LMgYXsI0S3

This should be a great relationship lol. https://t.co/T9MUhzplbq