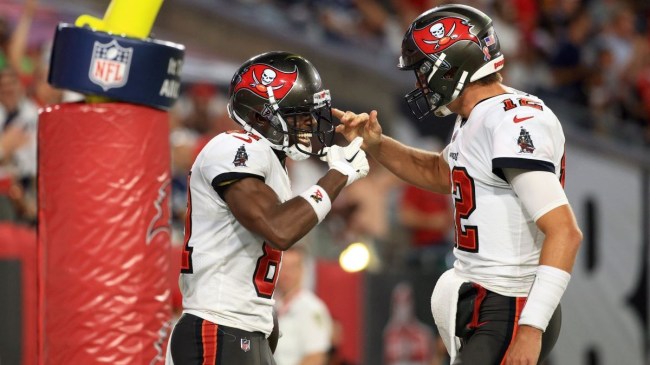 There’s never a dull moment in the life of former Pro Bowl wide receiver Antonio Brown. Brown has been out of the league for a year now, but he certainly hasn’t faded out of the spotlight.

When he’s not exposing himself to women in pools, Brown has spent his time taking shots at former teammate Tom Brady. Brady, of course, lobbied hard to bring Brown to Tampa Bay and later let the wide receiver live in his home. Somewhere along the line, whether out of resentment or jealousy or whatever, that relationship between the two went off the rails.

Now Brown has yet again set his focus on the Tampa Bay Buccaneers signal called. But this time it’s through sharing a text message that Brady sent him. Though if the message was meant to embarrass Brady, it may have backfired. As the incident only seems to make Brady look like a supportive friend and Brown look even more like a clown.

So is Antonio Brown attempting to make Tom Brady look like the bad guy here? Because he comes across as a damn good friend here… pic.twitter.com/8MZwsWFeg4

Brown shared the message from Brady via his Snapchat account. It read as follows:

“You are demonstrating very poor decisions and poor communication to so many people who have gone above and beyond to help you. You are acting selfish and unfortunately many of those people are exhausted by the erratic and unpredictable emotional behavior. When I met you, you were humble, willing to learn and anxious to improve things in your life. In a short period of time, you have done those things and accomplished some great things. And very much on the path to success long term. Unfortunately you have reverted very much back to a young immature man that is selfish, self serving, irrational and irresponsible.” – Tom Brady to Antonio Brown

It’s unclear what Brown’s intent was in sharing the message. But it only stands to make Brady look like a supportive friend. It also makes Brown look even worse than he did prior.

AB posting this thinking it makes Brady look bad tells you everything you need to know https://t.co/AA7WToTcne

Tom Brady with a great message to AB and AB is acting like posting it is roasting Brady… smh @ab grow tf up https://t.co/MzGtJS7Esa

A) what’re the chances that’s an actual text from Tom. B) even if it is, this just shows how GOOD of a friend TB is. Your friends are supposed to help you succeed. Not condone or assist in a downward spiral. https://t.co/HF263mXjS7

Brady may not appreciate Brown’s behavior, but he’ll certainly take the free PR.