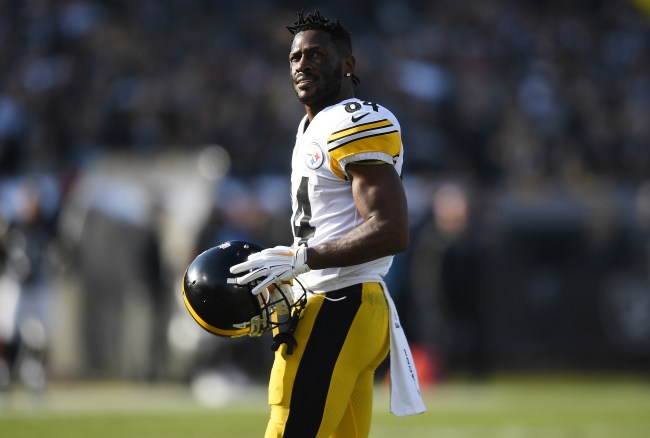 Superstar wide receiver Antonio Brown has yet to practice with the Oakland Raiders during training camp because he’s dealing with an issue with his feet.

Brown went social media this week to show off some nasty-looking blisters on his feet that explains his absence from practice.

This man trained so hard the bottom of his foot coming off! pic.twitter.com/jlbvBNX0nD

Apparently Brown may have frostbite on his feet.

According to former Bucs QB and PFT Live host Chris Simms he heard from someone with knowledge of the situation that Brown had frostbite on his feet from entering a crotherapy machince without wearing proper footwear.

On Monday, PFT Live co-host Chris Simms said that the photos posted by Brown don’t reveal blisters but the peeling of layers of of skins from the bottom of his feet. Simms said that he once had a condition like that, thanks to what he called an “unidentified Buc fungus” in Tampa.

After Monday’s show, Simms got word from someone with knowledge of the situation that Brown burned his feet by entering a cryotherapy machine without the proper footwear, and his feet were frostbitten.

Brown’s agent, Drew Rosenhaus, did not respond to a request for comment.

From Inside Training Camp: #Raiders WR Antonio Brown is still day-to-day with his troublesome feet after what team sources describe as a cryogenic chamber mishap. pic.twitter.com/4NoT7IS8Yj

That doesn’t sound good for Brown.