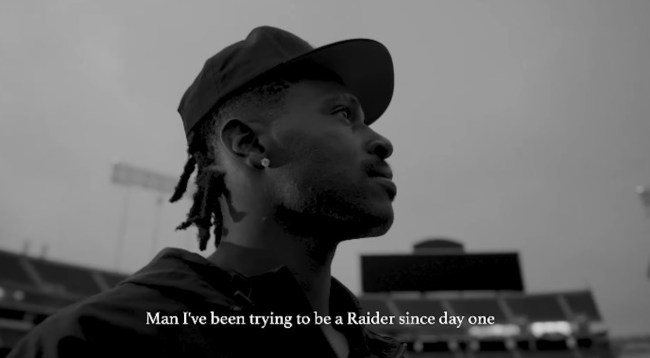 UPDATE (1:05 p.m.): Well, nevermind. ESPN’s Dianna Russini has reported that Gruden — apparently happily willing to be a puppet in Antonio Brown’s clown show — gave AB permission to use his voice in the video.

On @LeBatardShow, the producer of Antonio Brown’s hype video confirmed Jon Gruden approved the use of their phone conversation in video before it was released on social media #Raiders

Are you a regular person? Do you root for an NFL team not named the New England Patriots? Then odds are, you think Antonio Brown sucks!

Don’t worry, you’re not alone — as Dave Chappelle once said about President Trump, “I’ve never felt more American than when we hate on this motherfucker together”, and Antonio Brown seems to be creating that same sort of unity.

So, ipso facto, if you are a logical, rational, egomaniac-hating American football fan, then chances are you’re definitely hoping Antonio Brown gets in some sort of trouble for illegally recording former head coach Jon Gruden for the purpose of making a movie trailer about himself.

According to TMZ Sports, Brown broke a California state law by recording Gruden without his knowledge and laid out the exact law that Brown broke and what it would take for him to be convicted:

It’s all spelled out in California Penal Code 632 — an invasion of privacy statute that essentially forbids the recording of a conversation without the knowledge/consent of both parties. If convicted, it carries a maximum 1-year jail sentence, $2,500 in fines and other penalties.

So, if Gruden believes AB was in CA during the call (which is likely considering Brown was staying in a home near Raiders HQ in Northern California), Jon COULD report Brown to authorities with the intention of having Antonio prosecuted.

Of course, even if Brown was convicted, it’s VERY unlikely he would get jail time — but a criminal investigation/conviction would likely force the NFL to take action as well.

Unfortunately for those who detest AB as much as I do, given that Jon Gruden seems to be a very “go with the flow, let bygones be bygones” type of guy, the chances of him reporting AB are slim.

However, if the Raiders start the season 0-4 and those pettiness levels begin to rise, who knows what could happen? Because when it comes to Antonio Brown, everything is possible. Besides, given the way they got publicly clowned and manipulated by AB, you’d think that Oakland might want to return the favor.