Antonio Brown Has A Complete Meltdown, Takes Off His Shirt, And Runs On The Field In The Middle Of Game 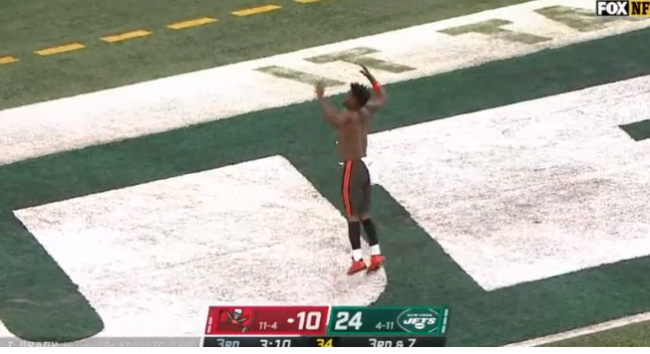 Antonio Brown’s time in Tampa Bay appears to be coming to an end.

In the middle of Sunday’s Bucs-Jets game, an upset Brown took off his shirt, threw it to the ground, and ran on the field before heading to the locker room. According to the broadcast, Brown was upset on the sideline and removed his gear despite pleas from teammates to not run on the field.

Video of Antonio Brown leaving the field after taking off his jersey and shirt and throw it into the stands. pic.twitter.com/1hwNYei5Fq

Antonio Brown took his jersey off, threw it into the stands and walked off the field during the Bucs' game against the Jets 😳 @brgridiron pic.twitter.com/Ysl6wI59SD

Here’s a view from the crowd.

Antonio Brown just took jersey and gear off and threw it into crowd. Celebrating and ran to the locker room. No idea what is going on. pic.twitter.com/uPALqGJGJo

Here's a sideline view of what happened with Antonio Brown. Looks like Mike Evans was trying to calm him down but nothing was going to help. AB took everything off and left.