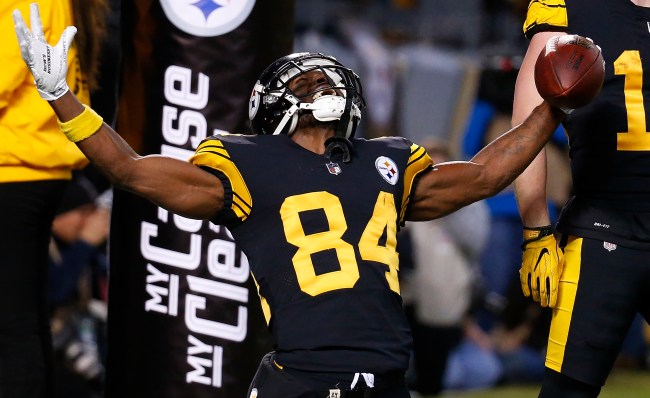 Antonio Brown got what he wanted when the Steelers finally traded him to the Oakland Raiders months after the disgruntled wide receiver forced his way out of Pittsburgh.

Raiders are trading a third- and a fifth-round pick to the Steelers for WR Antonio Brown, per source.

The Raiders appeared to be the only team seriously interested in paying Brown which essentially turned other teams off from attempting to trade for him.

Raiders are adding money to Antonio Brown’s deal: He now will have three years worth $50.125 million – with incentives to go to $54.125 million, per source.

Where there was no guaranteed money there’s now $30.125 million guaranteed, per source.

Unfortunately the return for the Steelers was pretty sub-par considering Brown is one of the best wide receivers in the game.

Shoutout to the 🐐 @MikeMayock because madden won’t even accept this! #AB pic.twitter.com/xduR21lj7r

Former NFL network host and current Raiders GM Mike Mayock is being hailed as a genius for the trade.

Amari Cooper out, Antonio Brown in. Toss in an extra No. 1 pick – from the Cooper deal – and the #Raiders are suddenly extracting tangible value. Nice start to the Mike Mayock era. Brown is an incredible player who will significantly aid the development of Derek Carr and this O.

The Raiders have THREE first round picks and didn’t use a single one of them to get Antonio Brown. Wow. Way to go Mike Mayock

Wow Antonio Brown to the Raiders and all they had to give up was a 3rd and 5th round pick. That is a great deal for the Raiders. Oakland still have three first round picks this year. Mike Mayock just made a great move for a first year General Manager.

Someone give Mike Mayock a pat on the back. Only a third and a fifth for Antonio Brown?

A third and a fifth? @AB84 is possibly the bargain of the offseason. Mike Mayock has done a stick em up job. https://t.co/DBL0tiXghs