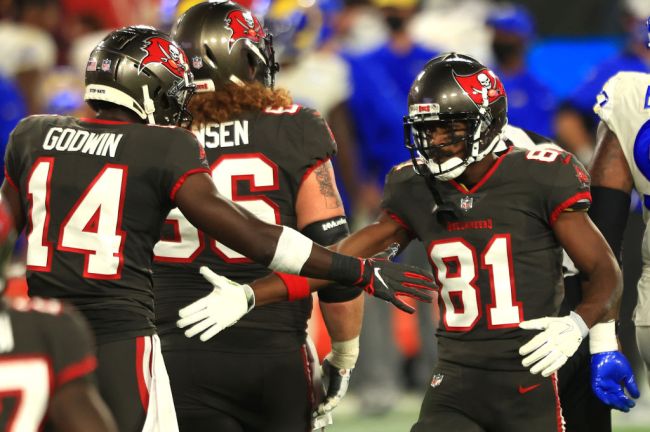 Less than a week after having a sideline meltdown during the middle of a game, Antonio Brown is now burning every bridge in Tampa Bay.

During an appearance on the Nelk Boys’ Full Send podcast, Brown took aim at Tom Brady for not helping get a better salary with the Bucs. During his rant, Brown implied that he was the best wide receiver on the Bucs when he asked, “who’s better than me over there?”

“If Tom Brady is my boy why am I playing for an earn-it salary?” “You’re my boy though, right? Gronkowski is his boy, right? How much is he getting paid? So why is AB on a prove-it deal? Who’s better than me over there? Let’s be real.”

More from Antonio Brown: “If Tom Brady is my boy why am I playing for an earnest salary? Gronkowski is his boy, right? How much did he get paid? So why is AB on a prove-it deal? Who's better than me over there?pic.twitter.com/z5TmwbtNAA

Antonio Brown on @fullsendpodcast on his usage with Bucs: "I'm still the best though. You're looking at the tape right here. So I'm asking you guys: Why am I not getting the ball targeted like a No. 1 receiver?"

NFL fans immediately ripped Brown for calling himself the best wide receiver on the Bucs, considering he was third on the depth chart behind Chris Godwin and Mike Evans.

Grow some balls fellas. Mike Evans is the correct answer. 2ndly Antonio Brown can put out any story he wants about the #Bucs “lying” but he is affirming everything the team and BA have said in one clip pic.twitter.com/kJJP8yv1Hj

Mike Evans and Chris Godwin are both much better than AB. https://t.co/vYcy8p6SpX

Quite literally… Gronk, Mike Evans and Chris Godwin are better than AB. If the hosts were real they would’ve told him that. https://t.co/JLvbCs9V7c

Blaming Brady for his contract and chirping that he's better than Godwin and Evans? Dude….STFU https://t.co/0HXfNEXhd3

Chris Godwin and Mike Evans hearing AB say he's the No. 1 receiver on the Bucs pic.twitter.com/sCR8zQhDm2

Antonio Brown thinking he was the best receiver in Tampa Bay is absolutely ridiculous. Mike Evan’s and Chris Godwin have been putting up insane (drama free) numbers FOR YEARS! Jameis Winston was QB for most of those years.Gronk is a HOF tight end…. The nerve of that man. 😒