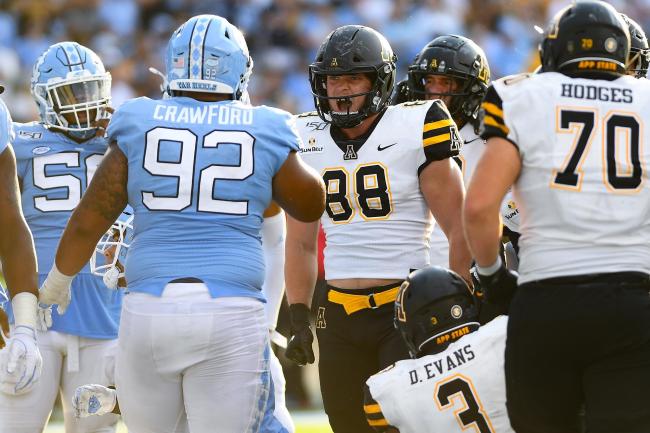 Appalachian State football believes that this year could be different. The Mountaineers, led by transfer quarterback Chase Brice, are 1-1 with a two-point loss to Miami.

With 10 games left to play, and one against a potential Top-15 Coastal Carolina team, there is a legitimate belief that the singular loss could be exactly that by season’s end. The boys are buzzin’ in Boone.

As such, the black and gold has a swagger that hasn’t been felt from the program since beating Michigan, if ever. Tight end Henry Pearson is no exception.

The 6-foot-3, 245-pound senior got a haircut that only the baddest of dudes can rock. Pearson swung over to Levi’s Barbershop in Banner Elk, N.C. and got himself “The Boz.”

The haircut was made famous by two-time Butkus Award winner, Heisman trophy finalist and National Champion linebacker Brian Bosworth. Boz was the most polarizing figure in college football and sported a famous hairstyle.

The mullet-esque, shaved-sides, racing stripe look is one that inspires confidence. For Pearson to follow suit, it means that he isn’t taking nonsense from nobody.

The Ho-Ho-Kus, New Jersey native is on the John Mackey Award watch list and was a Preseason All-Sun Belt third team player. He has only two catches for 28 yards thus far into 2021 and it is unclear whether he is still sporting “The Boz” under his helmet.

If he is not, perhaps a trip back to the barber would help his numbers. It’s simply impossible not to play with reckless abandon with Brian Bosworth’s haircut.