Arch Manning Put On A Show In Front Of Lane Kiffin, Archie Manning During His First Playoff Game Of 2021 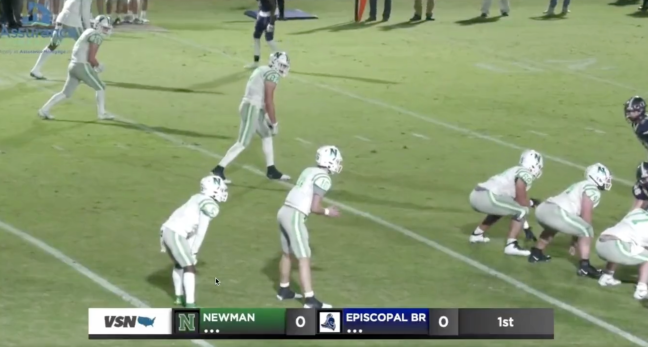 Arch Manning and the Newman Greenies have arrived at @EpiscopalBR. @WAFB pic.twitter.com/NNE4cA93CY

In attendance to watch the 6-foot-4, 215-pound son of Cooper and nephew of Eli and Peyton, was a trio important Ole Miss figures. Lane Kiffin, his son Knox(ford), and Manning’s grandfather Archie were all on the sidelines or in the stands.

Knoxford, fresh off of a junior league championship at quarterback in California, will be in attendance at the Rebels’ game against Vanderbilt this weekend and chose to join his dad on his private jet trip down to Baton Rouge to watch Mannning ball out.

Ole Archie you know who in attendance at @EpiscopalBR pic.twitter.com/gi7FQYTq0I

Manning, who is the top recruit in the Class of 2023, went 14-of-21 for 164 yards on the day. While those numbers might not stand out on first look, he added 46 yards rushing and the three total scores.

Perhaps more importantly, Manning did not throw an interception or turn the ball over and delivered a college-ready performance in the pocket. He stood strong to step into throws with a defender closing in, showed his toughness with defenders draped all over him, and sprinkled in some finesse to ice the cake.

Newman began the game with the ball and drove 73 yards on the opening possession.

Manning started the series with a 16-yard run and went on to break a saucy touchdown run a few plays later.

The play, however, was called back. It didn’t end up mattering because Manning capped the drive with a 28-yard touchdown pass to his favorite target, tight end Will Randle.

Later in the half, Manning found a hole for six.

Arch Manning put on the wheels and found a hole for this 17 yard touchdown run! XP muffed. Newman leads Epsicopal 16-0 with 21 seconds left in the first half! #FNF30 pic.twitter.com/RYjsSSxILi

Manning’s best/strongest run of the night came early in the second half. He dropped back, couldn’t find anyone open down the field, took off up the middle and carried the pile on his back.

Although Newman’s run game played a significant role in the win, 21 of 37 points can be attributed to Manning. His final score of the game came through the air near the start of the fourth quarter from 23 yards out.

Meanwhile, the Kiffins were loving it.

Here is a recap of the entire game:

The Newman Greenies take care of business on the road at Episcopal, 37-6. Arch Manning, Will Randle, and Chris Hunter help the Green Machine advance to the Division III semi-finals. pic.twitter.com/sneogSyEb5

Newman head coach Nelson Stewart had a lot to say about his star quarterback after the game:

“Arch is great. He’s physical and able to run the football. He’s tough. He took shots when they were there. I’m blessed to coach him. He can make you right a lot as a coach.”

With the win, No. 5 Newman advances to the Louisiana Division-III semifinals for a rematch against defending state champion Lafayette Christian.