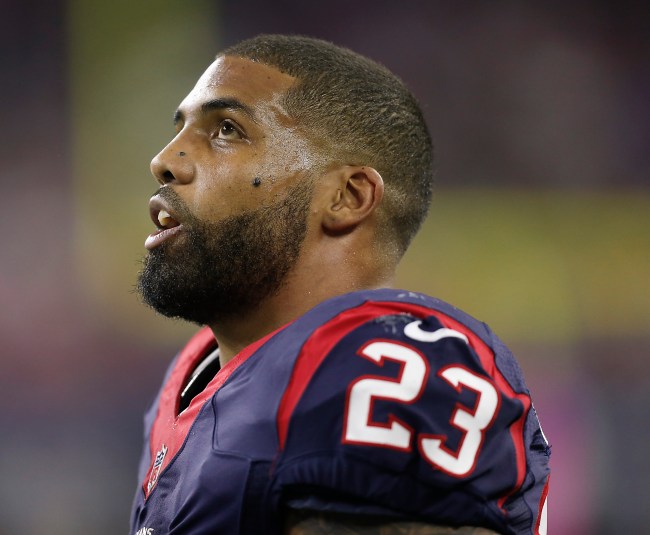 Arian Foster, a former NFL running back who had some Pro Bowl seasons with the Houston Texans before finishing his career with the Miami Dolphins in 2016, may have been a popular player for your fantasy team a few years ago, but the dude’s opinion on legendary rapper Tupac definitely didn’t seem to be too popular — if Twitter is any indication. And, after trashing Tupac’s music in a recent interview, Foster’s getting absolutely ripped by people on social media.

It all started with a simple little interview with Van Lathan’s Red Pill podcast, where Arian Foster — who has since focused on his own rap career since ending his NFL career — proclaimed that Tupac’s music “is not that deep.” Uh, what? If the only song anyone’s ever listened to of the slain rapper’s is “Changes,” it’s pretty obvious that Tupac rapped about deeper issues than, say, something like “Make ‘Em Say Uh,” by Master P. Take a look at the clip from Foster’s appearance on Lathan’s show below.

After saying such an unpopular thing, it was as if the dogs were let loose on Twitter, because people had lots to say back to Arian Foster, with so many throwing shots at the former NFL running back. Take a look at what some of the things people were saying.

@ArianFoster people don’t even know who your are bruh. So basically your career wasn’t that deep to us. We forgot about you and any of your plays. @2PAC name will be household. So shut your washed ass all the way up. Do they still produce your jersey??? Haven’t seen one.

Throw him in here!! Fact of the matter is that 2pac is DEEPER THAN HIS MUSIC & AS TIME PASSES BY MORE PROFOUND!!! The very fact that we are having this conversation 23years after his death proves it beyond a shadow of a doubt. Fearless, flawed, brilliant, and raw with genius! pic.twitter.com/xGacMirpPT

@ArianFoster sound like a fool talkin about Tupac, how can u call him your favorite artist and then say all the dumb shit, you even listen to the lyrics bruh?

@ArianFoster I GARENTEE IF 2PAC WAS ALIVE YOU WOULD BE HUMMING A DIFFERENT TUNE.
HE DID EVERYTHING AND DIED BY THE AGE OF 25
so anyone who's now older than pac when he died
I hope has matured past a 25 year old though process
smfh social media showing people true colors

When @ArianFoster says #TUPAC’s lyrics weren’t that deep… they’re deep than any of your receiving stats.
You can’t say the guy is one of your idols and trash his music all in the same breath. Come on man.

@ArianFoster that was for shock value right?? You can't honestly think that..

Someone needs to check Arian Foster head… Dude speaking out of his neck.. I'm so tired of you lame ass rappers talk down on Tupac.. Niggas with no resume, no awards, no shows outside his city ass boys always hating on a man who can't defend themselves..

Arian Foster can have his opinion and all, but, damn, it might be best to keep this one about Tupac to himself, because nobody enjoys seeing the wrath of social media attack. I’ve tried to find any possible reason to understand Foster’s side on this, but, unfortunately, the dude may be on his own island on this one — because nobody seems to agree with the former running back.