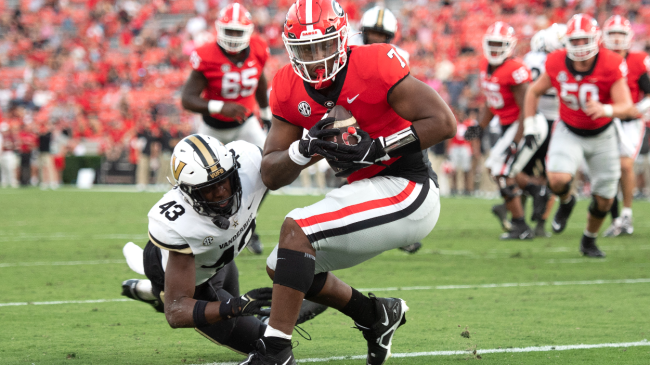 The Nebraska Cornhuskers picked up a major offensive weapon as it looks to rebuild a once proud program.

They landed key piece to the puzzle in tight end Arik Gilbert.

The Huskers had Big Ten championship aspirations last year but instead, fell flat on their faces. Many picked Nebraska to win the division, setting up a title game showdown between either Michigan or Ohio State.

That got derailed after a season opening loss to Northwestern, and the team never seemed to recover. A loss to Georgia Southern a few weeks later led to Frost’s dismissal, and they’d go on to finish just 4-8.

It was the program’s sixth consecutive losing season, the longest such streak since the 1950s. But hope is on the way.

The Cornhuskers seemingly landed their guy in Matt Rhule, who’s led major turnarounds at both Baylor and Temple. Things didn’t work out in the NFL, but he’s been proven at the college level.

Rhule was known for his physical brand of offense at Baylor, and he’s hoping to bring that style to Lincoln. He’ll now add a major player at the tight end position in Arik Gilbert.

The former five-star recruit announced his commitment to the team on social media. Gilbert was one of the top players in his high school class, and he’s still rated as the most talented tight end prospect ever according to many recruiting services.

He’ll now bring that talent to Nebraska, who is in dire need of playmakers.

Gilbert’s path to the Big Ten was an interesting one. He originally signed with LSU, but after finishing third on the team in receiving as a freshman, he transferred.

A commitment to Florida lasted about a month before he then made his way to Georgia. The pass catcher sat out his first season with the Bulldogs but was able to haul in a pair of passes in 2022.

After two seasons in Athens, he was the move again.

Arik Gilbert now figures to play a prominent role for the Cornhuskers. We’ll see how Coach Rhule can utilize him in his system.