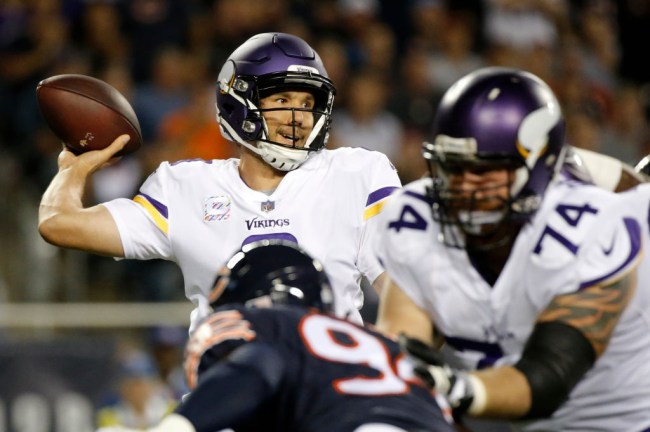 Sam Bradford barely played last season because of a knee injury but that isn’t going to stop him from getting paid. According to NFL.com’s Ian Rapoport, Bradford is going to get paid $20 million a year by the Arizona Cardinals.

Former Minnesota Vikings quarterback Sam Bradford is expected to sign with the Cardinals after the free-agent signing period officially begins on Wednesday, a team source informed told NFL Network’s Tiffany Blackmon. According to NFL Network Insider Ian Rapoport, Bradford’s deal is for one year at $20 million. He has a second-year option at $20 million, per Rapoport.
Bradford missed a large portion of the 2017 season after dealing with knee issues that eventually prompted him to have arthroscopic surgery in November.

The Internet of course mocked Bradford and the Cardinals after the deal was reported.

BREAKING: man robs Arizona cardinals owner Bill Bidwill was robbed of at least 15 million dollars, the suspect may look like this pic.twitter.com/G4xDIrSa0z

Live look at Sam Bradford showing up at AZ pic.twitter.com/VKGvcomfv4

I’m not sure how the Cardinals can justify giving Bradford $15 million guaranteed considering he’s been plagued with injuries for nearly his entire career. Hopefully the Cardinals have a solid backup in mind because if not they’re pretty much screwed.