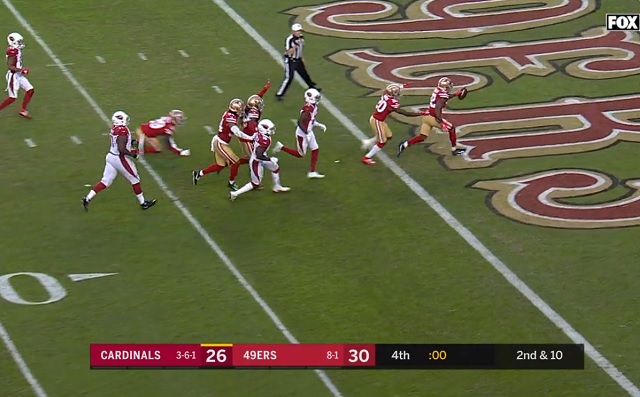 Gambling can be absolutely brutal sometimes.

On Saturday night many sportsbooks had the Arizona Cardinals as 10 point underdogs against the San Francisco 49ers.

The Cardinals are 5-1 ATS in their last six games.

They're 10-point underdogs this afternoon in San Francisco.https://t.co/Ud338fvhrb

Unfortunately for gamblers who bet on the Cardinals, the Niners, who were up four points at the time, scored a touchdown on the final possession of the game after the Cards fumbled the ball while attempting a wild lateral play. This meaningless touchdown turned a sure win for those who bet on the Cards into a push.

If you had Cardinals +10 (look at the score and time), that’s among the worst bad beats I’ve seen. Fortunately you still push. pic.twitter.com/oGHfx3EwuK

🚨BAD BEAT OF THE YEAR🚨

Cardinals (+10) were covering until the final whistle and ended in a push 🤮🤮🤮 pic.twitter.com/QK2AR1Zjms

Gamblers who bet on the Cardinals were absolutely sick.

This is so gross. I had Arizona +10 for a push since they didn't attempt an extra point. 🤔 https://t.co/QsRn25S6eI

Worst push of all time. I know that just didn’t happen. The Cardinals covered the +10 right? Someone tell me I’m fucking dreaming!!!!! 😡😡😡😡

Also, it's not a TD when a guy on the ground and touching an opponent grabs it and tosses it backwards.

Me and @Wilsonator51 when the 49ers get arguably the craziest play in NFL football to push +10 pic.twitter.com/0bWQdBYZpV

Cardinals +10 Push. That one hurts