Arizona Cheerleader Gets Ejected For Heckling Opposing Players Through Megaphone 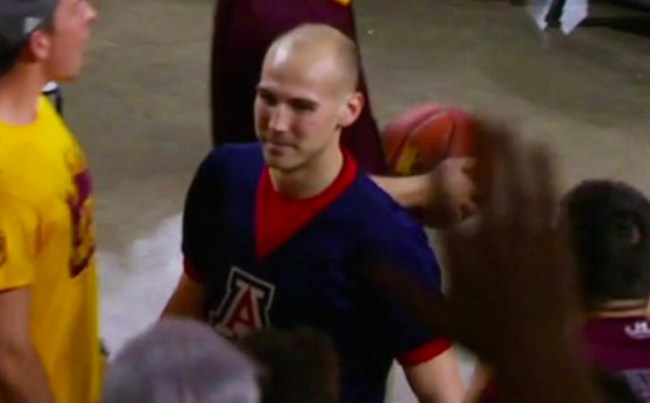 Not often do we see a cheerleader risk it all for his or her team. Yeah, they’ll jump around and wave their pom poms and smile for the camera, but how often do we see them really push the limits to give their team an edge? You don’t see that type of heroism often, if ever.

And then there’s this trailblazing Arizona basketball cheerleader who was ejected from Thursday’s game against Arizona State for heckling an opposing player.

Arizona State guard Remy Martin was at the free throw line in the second half when the male cheerleader started barking through a megaphone. He yelled “Not today, Remy!” Pretty innocent, but longtime Pac-12 official Randy McCall had already warned him to shut his trap.

McCall then walked over to the scorer’s table and said, “This guy needs to get out of here,” ESPN reports.

“He was yelling, using the [megaphone] to call out people by name, which is not acceptable,” McCall told the Arizona Republic. “And he was asked to please stop, and he chose not to.”

As ESPN points out, Rule 10, Article 8 of the official referee handbook dictates that cheerleaders “shall not commit an unsportsmanlike act,” such as “using musical instruments, amplified music or artificial noisemakers while the game is in progress, except timeouts and intermissions.”

Back in the olden days, guys would get a warning for fist fighting on the court, now we’re throwing out cheerleaders because we deem their megaphones to be weapons. Super soft.

This dude should have his cheerleading jersey retired…

Arizona was trailing 50-47 when that cheerleader got ejected.

They outscored ASU 30-20 the rest of the way. #Catalyst