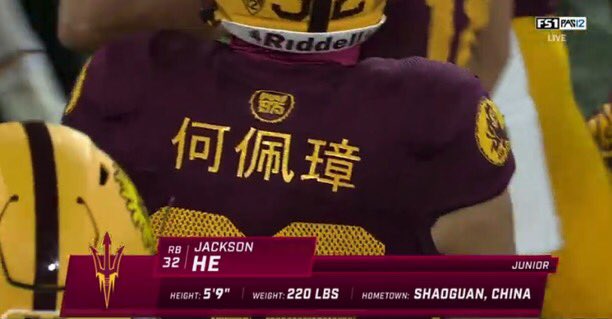 He Peizhang, better known as Jackson He, is the only active Chinese-born college football player on the FBS level and his story is pretty incredible. He, who chose the American name Jackson because of his love for Michael Jackson, moved to the United States when he was 17 years old.

In Shaoguan, China, where He grew up, childhood was built almost entirely around academics, and studies required up to 14 hours per day during the week. His parents began to worry about his grades, as the inability to attend a good university would prevent him from having a good career. And unlike in America, the SAT-like college-entry standardized test can only be taken once.

Instead of allowing him to pursue his educational opportunities in China, He’s parents chose to send him to the U.S. with hopes of him having a greater chance of attending a better university. Having no say in the matter, He packed up the only life he knew, said goodbye to his friends and family, and moved to America without knowing any english.

He was to study at Lutheran High School near San Diego and would not make the trip alone, as other Chinese students would join him. It still wasn’t easy.

One day, a few months after enrolling at Lutheran, He caught the eye of the school’s football coach. As a small private school, fielding players was difficult, and finding athletes with He’s size was even more so.

At roughly 250 pounds, the coach asked He if he wanted to play on the line. He, who unsuccessfully tried out for the basketball team and had his athletic background limited primarily to ping pong, was willing to give it a go. 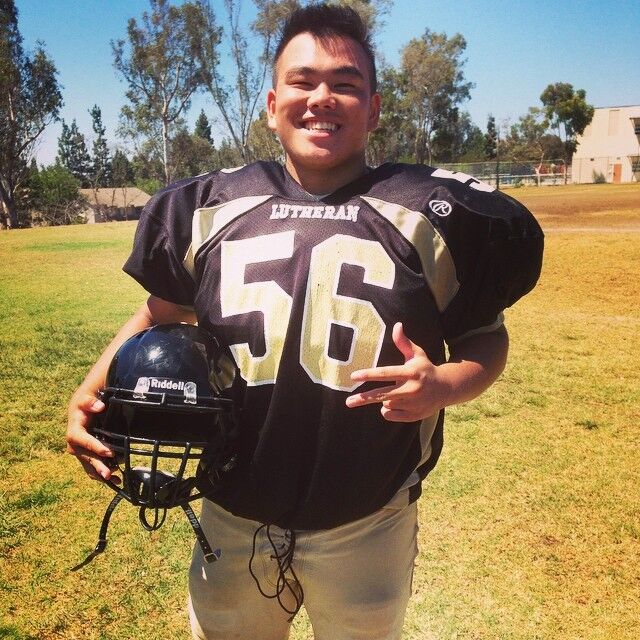 He was unfamiliar with the game entirely, but quickly learned how to block and keep defenders from reaching the backfield.

The team helped him make friends and learn the language, but He was hesitant to tell his family back home about his new endeavor. The stigma overseas revolved around broken bones and concussions. Thus, his parents didn’t want him to play. Without their blessing, He continued to learn the game and suit up on the offensive line and mix at running back for Lutheran.

He moved to the U.S. as a senior and only expected to stay one year, but loved football so much, he chose to reclassify and play another season. In addition, with improvement, there was an outside chance at playing college football and earning a scholarship that would help to soften the financial blow of a college education for his parents.

As a reclassified senior, the speed, size and mindset came together in the backfield. He became a huge contributor in the offense and started bowling over opposing tacklers.

The University of Jamestown, a small, NAIA-level program in North Dakota, took notice and ultimately signed him to its 2016 recruiting class. In only his third season playing football, he was forced to learn a different offensive scheme and started to play fullback. The new system and position was too confusing for someone so young to the game, and He redshirted as a freshman before earning a role in his second-year rotation.

A new coaching staff took over at Jamestown the next year and He didn’t like the direction of the program. He chose to return to China in 2018 and joined a club team in his home country while keeping his sights set on returning to America to play at a Division I school.

One of his club teammates went to Arizona State and suggested that He apply. He did and was accepted for the 2019-2020 calendar year. After initially emailing his game film to the coaching staff with no reply, He went to the football offices on campus and told the staff that he wanted to walk on to the team. Shortly thereafter, running backs coach Shaun Aguano asked him to join the scout team. Head coach Herm Edwards thought it was a great idea.

On Saturday, for the Sun Devils’ second game of the season, He (in his second year at ASU) became the only active China-born college football player to suit up on the FBS level in 2020.

welcome to college football, Jackson He!

When he received his jersey earlier in the week, with his name in Chinese lettering on the back, He broke down into tears. The emotions were well-deserved and entirely earned.